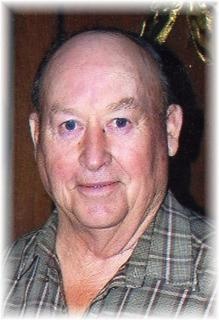 Funeral Services: Will be held on Monday, April 16, 2012, at 2:00 p.m. at Greenfield Gospel Chapel with burial in the Fontanelle Cemetery. Full military graveside rites will be held by the Wm. Thompson American Legion Post No. 703 of Bridgewater.

Memorials: To the Clifford Huff memorial fund to be established by the family.

Clifford William Huff, son of Samuel and Alice (Bond) Huff, was born September 26, 1933, north of Fontanelle, Iowa. He passed away on Wednesday, April 11, 2012, at the Cass County Memorial Hospital in Atlantic, Iowa, at the age of 78.

Clifford was four years old when his father passed away and his mother, brothers and sister moved to Fontanelle. He graduated from Fontanelle High School with the class of 1952. While in school he was active in basketball, football and baseball. He was a lifelong fan of the Yankees. As a young man he accepted the Lord as his personal Savior at a Berea Bible Conference and lived his faith.

In 1955, he was inducted into the Army and served his term in Korea, being discharged in October of 1957. On November 16, 1957, he was united in marriage to Delores Ione Maynes at the Little Brown Church in Nashua, Iowa. To this union was born Craig Alan and Roger Dean, who was stillborn.

Clifford was employed with United Telephone Company in Greenfield for fourteen years. In 1966, the family bought a farm east of Massena where he lived until he passed away. He farmed, worked at area sale barns and drove a C&M school bus for twenty years.

Clifford was a mild-mannered, gentle and generous man and loved his family, his nieces and nephews and school bus children dearly. He especially enjoyed watching their athletic activities. His son and grandson were his pride and joy. He enjoyed going to antique auctions and was a collector of many things but he especially enjoyed buying and restoring old wall telephones. He enjoyed meeting and visiting with his friends at the Bridgewater Cafe each morning.

He was preceded in death by his parents; brother, Morris Huff; parents-in-law, Jim and Edna Maynes; and brother-in-law, Darrell Maynes.

To order memorial trees or send flowers to the family in memory of Clifford Huff , please visit our flower store.