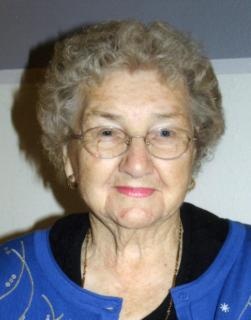 Funeral Services: Will be held on Tuesday, May 17, 2016, at 10:30 a.m. at the Orient United Methodist Church with burial in the Hill of Zion Cemetery, Rural Orient. Mr. Phil Price will officiate the service. A luncheon will be held at the church following the committal services at the cemetery.

Colleen June (Matthews) Vandewater was born on June 3, 1929, to William Dee and Janice Marie (Dwyer) Matthews in Adair County, Iowa. She graduated from Richland High School in 1946. After graduation she attended summer school in Creston, which lasted three months and qualified her to teach in a country school in the first eight grades. She decided that was not her career goal, so she worked at J.C. Penney’s for a year and a half. On August 25, 1947, she married Earl Eldon Vandewater at the Methodist Church parsonage in Creston, with Glen Capps and Shirley Antisdal as witnesses. After their marriage they settled on a farm west of Orient where they lived for many years. Two children were born to this union, Rosalie and Eldon. Earl and Colleen moved to Orient in 1985. As a farm wife she cooked many meals for farm hands and threshing crews. She raised a large garden and canned. She liked to tell of washing “many” a load of clothes in the old wringer type washing machine. There was a neighborhood club that did sewing and quilting for many years and she cherished those memories. Colleen was a long time member of Eastern Star and served as Mother Advisor to Rainbows. She enjoyed quilting and embroidery work. For a number of years she worked at the Neighborhood Center in Greenfield, at the Orient Bank of Memories, and at the Greenfield Library. A few weeks ago she attended the Richland Alumni Banquet with other classmates to be recognized as graduating 70 years ago.

While Eldon and Rosalie were at home, Colleen served as a 4-H leader. In 2002 Earl and Colleen served as Grand Marshals of Orient Pumpkin Days. For many years they drove ponies and a wagon in many local parades.

Colleen enjoyed following her grandchildren as they grew up. Whether in school, travelling, or as they started their own families, she kept in contact with letters and phone calls. Her refrigerator was filled with pictures of first the grandchildren and then their children. She kept track of every activity and location they travelled throughout the years. Colleen loved flowers, especially her roses, iris, hollyhocks, and ferns. Her ferns came from her Grandmother Matthews’ garden, journeyed to her mother’s garden, then to her home, and now they are growing in Rosalie’s Missouri backyard.

She was preceded in death by her parents, son, Eldon Lee Vandewater, and granddaughter Christina Vandewater, who died in infancy.

Ten years ago at age 76 Colleen took her first airplane ride to Florida to visit Angie’s family while they lived there. She so loved seeing the ocean and the beach. Countless times she recounted the wonderful memories of that event. She looked forward to family gatherings, especially Christmas. Family never left her home without a long-lasting, good-bye wave, and she patiently waited to hear the parting sound of the car horn as it turned the corner at the end of their street. This soft-spoken, caring, special lady will be greatly missed.

To order memorial trees or send flowers to the family in memory of Colleen Vandewater , please visit our flower store.