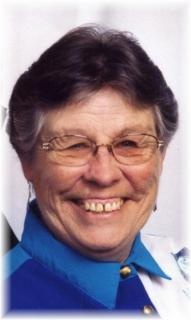 Funeral Services: Will be held on Saturday, May 4, 2013, at 2:00 p.m. at the Steen Funeral Home in Greenfield with burial at the Greenfield Cemetery. Pastor David Kincaide will officiate the service. A luncheon will follow the burial at the Nodaway Diner in Greenfield.

Memorials: To the Collene Nelson memorial fund to be established by the family.

Collene Kay Nelson was born on September 18, 1941, in Des Moines, Iowa, the daughter of Gilbert Henry and Winifred Maxine (Quick) Waggoner. She passed away on Tuesday, April 30, 2013, at the Greenfield Manor in Greenfield, Iowa, at the age of 71.

Collene was raised in Iowa and Missouri. On November 16, 1957, she was united in marriage to Jerry Nelson, Sr., in the United Methodist Church in Urbana, Missouri. To this union three children were born: Jerry, Tom and Dan. She worked for several different restaurants in the area including, Rico’s, The Maid-Rite, Kopper Kettle, Nodaway Diner and the Country Kitchen and sale barn in Stuart. She loved to make popcorn balls for her family and friends. She enjoyed camping, fishing, dancing, admiring wildlife, dining with friends, creative writing, caring for the campground at the Nodaway Lake and walking with the Lord.

To order memorial trees or send flowers to the family in memory of Collene Nelson , please visit our flower store.