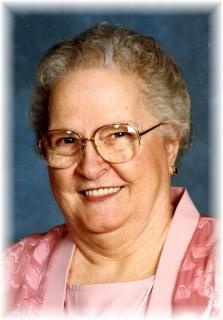 Columbine (Collie) Sullivan Vorrath passed away on Monday, January 2, 2012, at the Westbridge Care and Rehab in Winterset, Iowa.

Memorials: To the Greenfield Public Library.

Columbine (Collie) Sullivan Vorrath was born January 21, 1933, to George and Elma (Glasser) Dennis in Fontanelle, Iowa. She passed away on Monday, January 2, 2012, at the Westbridge Care and Rehab in Winterset, Iowa, at the age of 78.

She grew up in Fontanelle and graduated from Fontanelle High School in 1950. Collie accepted Christ as her Savior at age eleven. On August 19, 1950, she was united in marriage to James Sullivan in Greenfield, Iowa. To this union six children were born, Colleen, Steven, Cathleen, Cheryl, Kevin and Cristie. Except for the four years James was in the Army she lived her married life in the Greenfield area. During the years when her children were small she baked pies for Maid Rite, sold Stanley products, Avon, World Book and Mary Kay Cosmetics. After graduating from Southwestern Community College with an Administrative Assistant degree, she worked outside the home as a temporary until finding full-time work at Allied Insurance. She worked there 6 years and retired from there in 1999. After James died, she worked for a while for the Nodaway Diner.

She liked playing the piano and gave piano lessons for a few years. She was a Sunday school teacher and Girl Scout leader for several years. She loved raising flowers. She enjoyed sewing, square dancing and fishing with Gary. Traveling was a passion, and she managed to visit all 50 states with Maine being the last state that she visited with Gary in November 2011. A trip that she and Gary particularly enjoyed was the trip to Fairbanks, Alaska in June of 2009. They spent two weeks with Gary's daughter, Gloria and her husband Jeff. They saw Mt. Kinley three different days and felt lucky to have seen it at all. While in Texas, she enjoyed riding the ferry across the ship channel at Galveston.

Collie was especially excited to finally find documentation to prove family lineage to an ancestor from the Revolutionary War. Several years ago she became a member of the Daughters of the American Revolution.

Collie belonged to TOPS and looked forward to Tuesday mornings with TOPS gals.

She was preceded in death by her parents; husband, James Sullivan in 1999; parents-in-law, Art and Clara Sullivan and Lawrence Vorrath; brother, George W. Dennis and infant brothers, Marvin and Delmar and sister, Delma.

She is survived by her husband Gary Vorrath of Greenfield; children, Colleen and Jerry Oxley of Greenfield, Steven and Cleta Sullivan of Casey, Cathleen and Doug O'Neal of West Des Moines, Cheryl and Ron Belden of Dexter, Kevin and Tina Sullivan of Dexter and Cristie Sullivan of Van Meter; three step children, Terry and Lynn Benton of Durant, Iowa, Douglas and Marigarita Vorrath of Denison, Iowa, and Gloria and Jeff Martin of Fairbanks, Alaska; 29 grandchildren; 19 great grandchildren; two brothers, Derrol and Evelyn Dennis of Leesburg, Florida and Dewey and Sue Dennis of State Center, Iowa; mother-in-law, Lucille Vorrath of Greenfield; other relatives and friends.

To order memorial trees or send flowers to the family in memory of Columbine (Collie) Vorrath , please visit our flower store.
Send a Sympathy Card