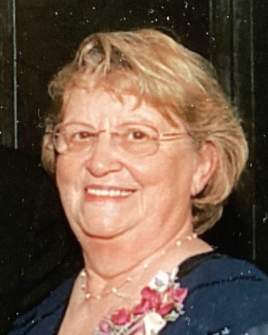 Open Visitation without the family present

Celebration of Life Services: Will be held on Saturday, September 24, 2022, at 11:00 a.m. at the Greenfield United Methodist Church with burial in the Orient Cemetery in Orient, Iowa.  A luncheon will follow the committal service at the Orient United Methodist Church. Pastor Melinda Stonebraker will officiate the service.  The Lamb Funeral Home in Greenfield is in charge of the professional arrangements.  Online condolences may be left to the family at www.lambfuneralhomes.com.

Memorials:  In lieu of flowers memorials may be made to your local food pantry or to a memorial fund to be established by the family.

Cora Etta McClain was born June 14, 1936, in Orient, Iowa, the daughter of Leland and Clara (Purdy) Duff.  She passed away on Monday, September 19, 2022, at the Deerfield Health Care Center in Urbandale, Iowa, at the age of 86.

Cora grew up in the Orient area and graduated from Orient High School.  On May 29, 1953, she was united in marriage to Lewis McClain in the Congregational Church at Zion.  To this union three children were born: LouAnn, Linda and Steven.

Cora was the Adair County Treasurer for several years and later became an Adair County Supervisor.  She then opened her own store in Greenfield, Cora’s.  She loved being with her family and friends, playing cards, traveling, shopping and being with the public.

She was preceded in death by her parents; husband, Lewis; daughter, Linda Patterson; sister, Phyllis Frederick and husband Chuck; mother and father-in-law, Nellie and Everett McClain; and sister and brother-in-law, Helen and Warren Ross.

The family of Cora McClain wishes to express their gratitude for all acts of kindness shown to them in their time of sorrow and invites you to join them for a luncheon at the Orient United Methodist Church following the committal services at the cemetery.

To order memorial trees or send flowers to the family in memory of Cora McClain, 86, of Orient, please visit our flower store.

Open Visitation without the family present

Burial will follow the service in the Orient Cemetery. A luncheon will be held at the Orient United Methodist Church following the committal service.

The service will be livestreamed on the following link: https://www.youtube.com/GreenfieldIowaUMC