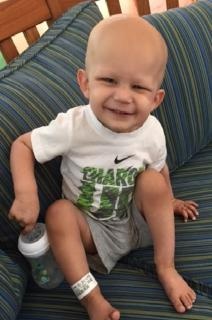 Funeral Service: Will be held on Tuesday, August 30, 2016, 6:00 p.m. United Methodist Church in Cumberland with burial in the Weirich Cemetery, Lyman, Iowa. Pastor Casey Pelzer will officiate the service.

Family Visitation: The family will greet friends on Monday, August 29th, at the Steen Funeral Home in Massena from 5:00 p.m. to 8:00 p.m.

Memorials: In lieu of flowers memorials may be directed to the Children’s Hospital in Omaha, Nebraska.

Creed Alexander Wilson, the son of Kyle and Chelsey Wilson was born on August 27, 2014, in Hemet, California. He passed away on Friday, August 26, 2016, surrounded by his parents and family at his home in Atlantic, Iowa, at the age of 1 year, 11 months and 30 days.

Creed's smile was ornery but would light up a room. He liked Batman, Mickey Mouse , popcorn, planes, his daddy's car, and especially his grandma and grandpa's visits.

He was preceded in death by his uncle, Austin and great grandmother, Linda; and twin uncles, Christopher and Nicholas.

Creed is survived by his parents, Kyle and Chelsey Wilson of Atlantic; grandparents, Traci and Kurt Luke of Lewis, Bernard and Kim Wilson of Carter Lake, Iowa and Kyle and Julie Williams of Massena; two aunts, Destiny Luke and Paige Williams; uncle, Scott; uncle, Mike; other relatives and friends.

To order memorial trees or send flowers to the family in memory of Creed Wilson , please visit our flower store.
Send a Sympathy Card