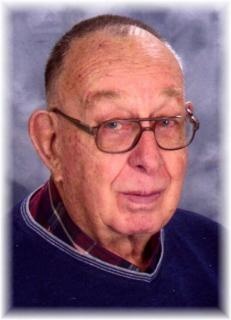 Funeral Services: Will be held on Saturday, December 22, 2012, at 10:30 a.m. at the Immanuel Lutheran Church in Greenfield with burial at a later date in the Greenfield Cemetery.

Memorials: May be made to the Dale Barnes memorial fund to be established by the family.

Dale Leroy Barnes, Sr. was born on September 12, 1926 in Greenfield Adair County Iowa to Hannah Marie (Schildt) and Ralph Emerson Barnes. He passed away on Tuesday, December 19, 2012 at his home in Greenfield, Iowa, at the age of 86.

Dale graduated from Greenfield High School in 1944. He enlisted in the U. S. Navy in August of 1944, and went to St. Louis for electrical school, to Camp Crowder for teletype school and to Mare Island for coding machine school. Dale was discharged from the service in July 1946. Dale went to Coyne Electrical School for radio repair and spent two years wiring houses. Dale worked at the Post Office from October 1949 until retirement July 13, 1981. Dale went into plumbing and heating for 20 years and then drove for Southern Iowa Trolley for 7 ½ years.

On April 8th, 1950, he was united in marriage to Doris Rose David. To this union six children were born, Rose, Gloria, Dale Jr., Beverly, Donald and Angela.

He was a faithful member and elder at Immanuel Lutheran Church, Greenfield, Iowa. He was always helping his family and friends fixing things on their houses. He enjoyed making wood crafts and he started making quilts after Doris passed on.

He was preceded in death by his parents, his wife Doris, his sister Mary, and brother Bill.

To order memorial trees or send flowers to the family in memory of Dale Barnes , please visit our flower store.