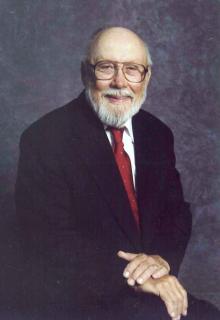 Dale Feazell passed away on Friday, October 28, 2011, at the Mercy Medical Center in Des Moines.

Celebration of Life Services: Saturday, November 5, 2011 at 11:00 a.m. at the Steen Funeral Home in Massena. There will be no visitation.

Memorials: To the Dale Feazell memorial fund to be established by the family.

Dale Feazell was born October 20, l927 in Bridgewater to Daisy (Sulgrove) Feazell and Dr. George Feazell. He graduated from Iowa State College and was married to Marilyn Pierson following graduation in June l951. In college, Dale was a member of Alpha Tau Omega, a social fraternity, and Scabbard and Blade, a military honorary fraternity.

They lived in San Diego, CA while Dale served in the Navy during the Korean War. They returned to Iowa in 1954 living in Massena, Woodward, and Hudson as Dale pursued his career in education. In these towns, Dale took an active role in civic and commercial organizations.

To order memorial trees or send flowers to the family in memory of Dale Feazell , please visit our flower store.
Send a Sympathy Card