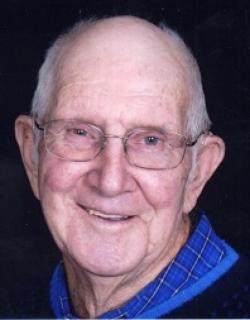 Celebration of Life Services: Will be held on Friday, March 10, 2017, at 10:30 a.m. at the Emmanuel Lutheran Church in Fontanelle with burial in the Fontanelle Cemetery with full military graveside rites conducted by the Fontanelle American Legion Carlson Post No. 247. Pastor Steven Broers will officiate the service. The Steen Funeral Home in Greenfield is in charge of the professional arrangements.

A luncheon will be held at the church following the committal services at the cemetery on Friday, March 10th.

Memorials: Memorials may be made to the Dale Finck memorial fund to be established by the family.

Dale grew up and attended country school in Adair County. He served his country in the United States Army from 1951 to 1953. On November 14, 1951, he was united in marriage to Norma Arlene Jacobson in Greenfield, Iowa. To this union three children were born: Jim, Gary and Sherri. Dale worked for REA in Greenfield, Mac’s Electric in Greenfield and then decided to be self-employed and started his own electrical and plumbing business, Dale's Electric and Plumbing in Greenfield until he retired in 2000. Dale also did snow removal for the Greenfield Schools and many local businesses. He was the grounds keeper and grave digger for the Fontanelle Cemetery for many years.

To order memorial trees or send flowers to the family in memory of Dale Finck , please visit our flower store.