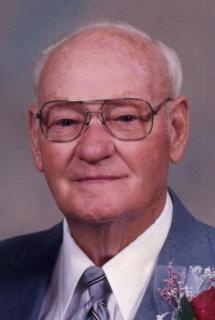 Funeral Services: Will be held on Monday, March 21, 2016, at 10:30 a.m. at the Immanuel Lutheran Church in Greenfield with burial in the Greenfield Cemetery. A luncheon will be held at the church following services at the cemetery. The Rev. Dr. Keith Schweitzer will officiate the service.

Family Visitation: The family will greet friends at the Steen Funeral Home in Greenfield on Sunday from 3:00 p.m. to 5:00 p.m.

Memorials: To the Dale Wahe memorial fund to be established by the family at a later date.

Dale Frederick Wahe was born on November 8, 1924 in Adair County, Iowa to Fred Wahe and Laura Schuler Wahe. His early years were spent on a farm in rural Adair County before moving to Greenfield in the early 1940’s. Dale married his childhood sweetheart, Lois Jean Bittner, on January 16, 1944. Two children were born to them, Jerry Wayne Wahe and Carol Jean Wahe. Dale’s wife Lois passed away in 1975. Dale then married Jo-Ann Frances Bublitz in 1976; she passed away in 2007.

Dale earned his living in the trucking industry, hauling primarily livestock and grain. He started by working with his dad and brother Dean. In 1950 Dale set out on his own and continued hauling until he retired in 2006 at the age of 82. He also had a small engine repair business for many years. His businesses put him in contact with many local farmers and businessmen. Dale never met a stranger, striking up a conversation with anyone that came in close contact.

Music and family were central to Dale’s life. He received his first guitar as a child and taught himself to play. He gave his first public performance at the age of 10, performing “Home on the Range” at a country school program. His love of music was strong his entire life. An overnight stay at his house often included a 6:00 am wake call to him playing his keyboard (also self-taught). He performed anywhere and everywhere, including local dance halls and the hospital. In the early 2000’s, Dale joined with a group of fellow musicians to re-open the Chicken Inn in Creston as a place for Senior Musicians to play music, dance, and have a good time.

Dale moved to Greenfield Manor in February 2016. Following declining health and a short illness, he passed away March 15, 2016. Dale is survived by son Jerry (Marilyn) Wahe, daughter Carol Wahe Petznick, 4 grandchildren, and 9 great-grandchildren, as well as partner, Dawn Christensen, many nieces and nephews, and a large group of friends. He was preceded in death by wife Lois Wahe, wife Jo-Ann Wahe, his parents Fred and Laura Wahe, brothers Dean and Bill, and son-in-law Hal Petznick.

Dale’s personality was larger than life and he will be greatly missed by all who knew him.

To order memorial trees or send flowers to the family in memory of Dale Wahe , please visit our flower store.