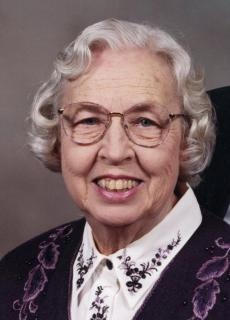 Funeral Services: Will be held on Friday, September 25, 2015, at 10:30 a.m. at the Emmanuel Lutheran Church in Fontanelle with burial in the Fontanelle Cemetery. Pastor Steven Broers will officiate the service. A luncheon will be held at the church following the burial.

Open Visitation: Will be held on Thursday, September 24, 2015, from 4 to 8 p.m. at the Emmanuel Lutheran Church in Fontanelle.

Family Visitation: The family will greet friends on Thursday evening at the Emmanuel Lutheran Church in Fontanelle from 6 to 8 p.m.

Darlene Alberta Herr was born on June 13, 1920, the oldest daughter of Oscar and Emma (Baudler) Gross at the farm, one mile east of Fontanelle, Iowa. She was baptized on July 7, 1920 and confirmed at Emmanuel Lutheran Church in Fontanelle, Iowa, where she remained a lifelong, faithful member.

On June 29, 1941, Darlene was united in marriage to Gilbert Herman Herr and began their married lives on the farm where she grew up. To this union two sons were born: Ronald John and Galen Gilbert.

As a youth, she helped on the family farm and at the Gross Cabin Park, cleaning the cabins and washing many bed sheets with her sisters and mother. She was a dutiful big sister, keeping track of and caring for her younger sisters, Berthie and Violet.

Darlene enjoyed embroidery, baking, canning and cooking. She also taught Bible and Sunday school for many years, sharing her faith and touching the lives of many children. She also enjoyed gardening and her flowers.

She was a loving mother and especially enjoyed being a grandmother to her five grandchildren: John, Stephen, Philip, David, and Maggie.

Darlene also had a passion for genealogy, and spent many hours researching and compiling family histories and keeping and updating the information. She had an impressive memory for details and dates.

She enjoyed visiting with friends and family both home and abroad. Darlene and Gilbert were fortunate to have traveled to Germany to visit with family and enjoy the European countryside.

In her later years, she enjoyed living on the farm where she grew up, watching birds and the animals. She particularly enjoyed Elizabeth Baudler’s sheep and the baby lambs in the spring.

To order memorial trees or send flowers to the family in memory of Darlene Herr , please visit our flower store.