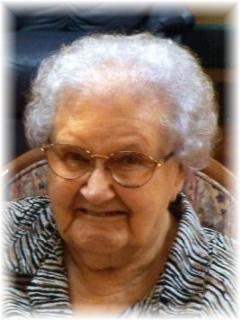 Funeral Mass: Will be held on Saturday, June 1, 2013, at 10:30 a.m. at the St. Patrick’s Catholic Church in Massena with burial in the St. Mary’s Cemetery, rural Bridgewater. A luncheon will follow the burial at the church.

Memorials: To the Darlene Kordick memorial fund to be established by the family at a later date.

Darlene Mary Kordick was born on October 31, 1915, the daughter of Jacob and Caroline (Gruss) Welsch in Jackson Township, Adair County, Iowa. She passed away on Wednesday, May 29, 2013, at the Good Samaritan Society in Fontanelle at the age of 97.

Darlene was raised in Jackson Township, Adair County, Iowa. She attended school through the 8th grade in Jackson Township. On February 7, 1934, she was united in marriage to Joseph L. Kordick in the St. Mary’s Catholic Church, rural Bridgewater, Iowa. To this union three children were born: David, Marlene and Phil. They lived on the family farm north of Bridgewater until they retired in 1977. Joe and Darlene moved to Anita where Darlene remained until entering the Fontanelle Good Samaritan Society in October of 1996. She enjoyed gardening, cooking, embroidering and playing cards. She was active in the Altar Society at St. Mary’s, Bridgewater, St. Patrick’s in Massena and St. Mary’s in Anita. Darlene especially enjoyed visits from her family, when on the farm, in town or in the nursing home. She was a member of the Anita Garden Club.

She was preceded in death by her parents; husband, Joseph in 1979; granddaughter, Shelly Kordick; brother, John Welsch; and three sisters, Ethel, Irene and Agnes.

To order memorial trees or send flowers to the family in memory of Darlene Kordick , please visit our flower store.
Send a Sympathy Card