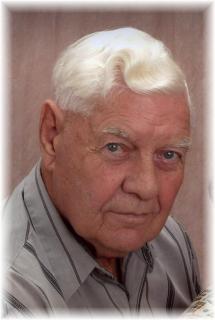 Funeral Services: Will be held on Wednesday, January 9, 2013, at 10:30 a.m. at the Avondale United Methodist Church, rural Fontanelle with burial in the Garner Cemetery. Military graveside rites will be conducted by the William Thompson American Legion Post No. 703 of Bridgewater. Pastor John Greenlee will officiate the service.

Visitation: Will be held on Tuesday, January 8th, at the Steen Funeral Home in Fontanelle from 6:00 p.m. to 8:00 p.m. with the family present.

Memorials: To the Darrell Stuva memorial fund to be established by the family.

Darrell married Verlea Ilah Dodge April 15, 1945 at the Creston Methodist Parsonage. Darrell left for the Army on June 2, 1945 where he was stationed in Italy. He was discharged on February 7, 1947. After his return from the Army he worked at the Bridgewater Fullerton Lumberyard until they moved to their farm in September, 1947. On April 9, 1948 they were blessed with a son, Dennis Darrell Stuva. They lived on the home farm just west of the Avondale Church for 52 years before moving to their home in Fontanelle. Darrell enjoyed farming and keeping the homestead neat. Darrell moved to the Good Samaritan Society, Fontanelle in April, 2012 where he remained until his death on January 6, 2013.

Darrell attended the Avondale United Methodist Church, rural Fontanelle. He was a member of the American Williamson Thompson Legion Post #0703 for the past 50 plus years.

Darrell will be greatly missed by his family & friends.

To order memorial trees or send flowers to the family in memory of Darrell Stuva , please visit our flower store.
Send a Sympathy Card