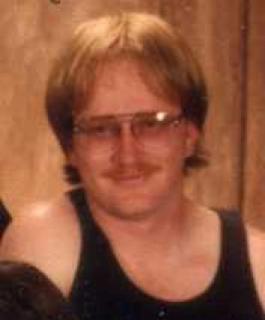 Funeral Services: Friday, April 22, 2011, at 10:30 a.m. at the Steen Funeal Home in Greenfield with burial in the Hebron Cemetery, Rural Orient, Iowa.

Memorials: To the Greenfield Bowl.

David was raised and graduated from Winterset High School in 1988. After moving from home in Winterset he went to Corning, Iowa, then to Thayer for about four years. He then moved to Greenfield in 2001. He was employed at Cardinal IG in Greenfield. He loved derbying, fishing, partying, shooting pool which he was in a pool league in Madison and Warren Counties in 1995-1996, tinkering with his Monte Carlo, and hanging with his family and friends.

He was preceded in death by his father, Russell Giles; grandparents; aunts and uncles.

To order memorial trees or send flowers to the family in memory of David Giles , please visit our flower store.
Send a Sympathy Card