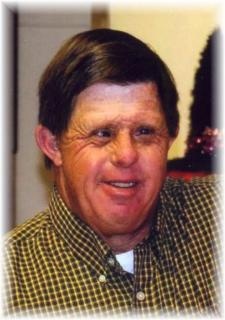 Funeral Mass: Will be held on Saturday, June 13, 2015, at 10:00 a.m. at the St. Patrick’s Catholic Church in Massena with burial in the St. Mary’s Catholic Cemetery, rural Bridgewater. A luncheon will follow at the church following the burial.

Family Visitation: The family will greet friends on Friday evening from 6 to 8 p.m. at the Steen Funeral Home in Fontanelle.

Memorials: To the David Westphal memorial fund to be established by the family at a later date.

David Kenton Westphal was born on January 14, 1952, in Greenfield, Iowa, the fourth of five sons born to Glenn George “Jack” and Leta Isabelle (Goodale) Westphal. He passed away on Monday, June 8, 2014, at the Greater Regional Medical Center in Creston, Iowa, at the age of 63.

David completed special education classes at Greenfield, Iowa. He worked on the family farm until his parents retired. In 1975, he began working for Innovative Industries in Creston. In 1994, he began working on a janitorial crew cleaning local businesses until his retirement in 2012. In 1985, David moved from Creston to Afton, Iowa and lived at the Community Adult Residential Environment until his death. David would quickly tell anyone who asked that C.A.R.E. was his home and his other family.

The janitorial job was a good match for David since it was not uncommon for him to remove everything from his room on weekends. Doing so allowed him to clean under everything and clean each item as he placed it back.

David was not just immaculate with his room but also his personal appearance. He wore a coat and tie to any event he felt it was warranted including his bi-annual staff reviews.

David always talked of helping kids. He collected pop cans and pull tabs for the Ronald McDonald House in Des Moines. He was a lifelong participant of Special Olympics. The pinnacle came when he won a gold medal at state in bowling. He was also an avid professional wrestling fan.

He enjoyed riding his tricycle and could be seen frequently riding around town. He would be going out for snacks or a meal or just to visit with his many friends. David truly never met a stranger. He had a remarkable memory for names and faces and could recall people even if it had been years since they last spoke. His greatest love was for his family, especially nephews and nieces. For many years David would slip away after Christmas dinner and secretly dress up as Santa. “Santa” would then make a surprise visit. Everyone young and old had to sit on Santa’s lap and tell what they wanted for Christmas. Then Santa would be on his way and David would appear just in time to open presents.

For those who could and would take the time, David was a joy to be around. He was a kind and gentle soul. He and his ready smile will be greatly missed by his family and many friends.

He was preceded in death by his parents; two nephews, Todd and Jarod Westphal; and great nephew, Christopher Westphal.

The family of David Westphal wishes to express their gratitude for all acts of kindness shown to them in their time of sorrow and invites you to join them for a luncheon at the church following the services at the cemetery.

To order memorial trees or send flowers to the family in memory of David Westphal , please visit our flower store.