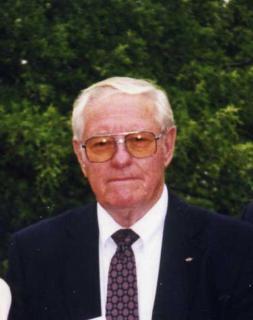 Funeral Services: Wednesday, April 6, 2011, at 10:30 a.m. at the United Methodist Church in Fontanelle with burial in the Fontanelle Cemetery with full military graveside rites by Wm Thompson American Legion Post No. 703 and Fontanelle American Legion Carlson Post No. 247.  Masonic Services will be held by the Greenfield Crusade Lodge No. 386 A.F. & A.M.

Memorials: In lieu of flowers, the family suggests memorials to the Great Regional Hospice Home in Creston for their great care or the Za-Ga-Zig Shrine in Des Moines, for their work with children and hospital charities.

Donald “Dean” Brown passed away on April 2, 2011, at the Greater Regional Hospice Home in Creston, Iowa, of pancreatic cancer. Dean was born in Kansas City, Missouri, on January 18, 1930. His parents were Harold and Mary (Bond) Brown. Dean grew up in the Fontanelle, Iowa, area. He graduated in 1948 from Fontanelle High School. Dean was in the US Army, spending the majority of his time as a surveyor with the 29th Engineers Battalion in the Philippines during the Korean War.

Dean was united in marriage with Florence “Eileen” Harlan on January 15, 1951. To this union, two children were born: L. Curtis and Patricia A Brown. They lived on the family farm northwest of Fontanelle until July of 1983, when Dean and Eileen moved to Creston, Iowa.

Dean farmed for several years. He then went into business with his brother-in-law, Al Mensing, operating M & B Supply. A few years later, Dean and Eileen operated Brown Service and Supply, a farm equipment sales and service business of Arts-Way Manufacturing equipment. Dean also became the area sales representative for Arts-Way, Armstrong, Iowa. He worked for them for over 25 years. In 1995, Dean became the sales representative for Central City Scales, Central City, Nebraska. He worked for them through the fall of 2010, when he became ill. Dean loved working with his customers and working at the farm equipment shows. He looked forward to keeping contact with the many people he worked with throughout his sales career.

Dean loved being with his family and friends. He loved his antique cars. He and Eileen have had several antique cars, but his favorite was the restored 1958 Ford Fairlane Retractable convertible. He enjoyed driving his cars in parades. He also loved going to the Iowa Hawkeye Football games with Curtis. They would tailgate with some great friends they met while attending the games.

He was a member of the Fontanelle United Methodist Church, the Fontanelle/Greenfield Masonic Temple, and the Za-Ga-Zig Shrine in Des Moines.

He is survived by his wife, Eileen of Creston, Curtis and Patricia and his grandson, Brian Brown, all of Des Moines, brother Jack Brown of Fontanelle, and sister Janet Stapleton of Stuart, and several nieces and nephews.

In lieu of flowers, the family suggests memorials to the Great Regional Hospice Home in Creston for their great care or the Za-Ga-Zig Shrine in Des Moines, for their work with children and hospital charities.

To order memorial trees or send flowers to the family in memory of Dean Brown , please visit our flower store.
Send a Sympathy Card