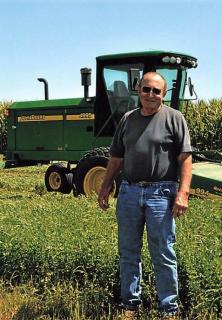 Public Graveside Services: Will be held at the Greenfield Cemetery in Greenfield on Friday, June 12, 2020, at 11:00 a.m. Pastor Steven Broers will officiate the service. Due to COVID-19, Social Distancing will be practiced. The Steen Funeral Home in Greenfield is in charge of the professional arrangements.

Memorials: May be directed to the Dean Feick memorial fund to be established by the family at a later date.

Dean Eugene Feick was born July 22, 1934, in Jackson Township, Adair County, Iowa, the son of Edwin and Helen (Huntington) Feick. He passed away on Sunday, June 7, 2020, at the Greater Regional Hospice House in Creston, Iowa, at the age of 85.

Dean was raised in rural Fontanelle and graduated from Fontanelle High School in 1952. He served his country in the United States Army. On September 9, 1961, he was united in marriage to Ann Weaver in the Greenfield United Methodist Church. To this union one son, Steve was born.

They lived in rural Fontanelle their entire married lives and operated a dairy farm for 42 years. He served on the board for AMPI as a voting delegate. Dean enjoyed watching sports, especially basketball. He farmed all of his life and his passion was raising and making hay with his John Deere equipment.

He was preceded in death by his parents; sister, Evelyn Rater; and nephew, Brian Feick.

To order memorial trees or send flowers to the family in memory of Dean Feick , please visit our flower store.
Send a Sympathy Card