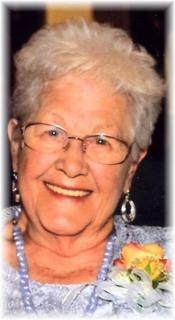 Funeral Services: Will be held on Thursday, August 14, 2014, at 11:00 a.m. at the Steen Funeral Home in Greenfield with burial at the Greenfield Cemetery. Pastor Eric Schubert will officiate the service.  A luncheon will be held at the Greenfield United Methodist Church following the committal services.

Family Visitation: The family will greet friends on Thursday at the Steen Funeral Home in Greenfield from 10:00 a.m. until service time.

Dee grew up in Greenfield and graduated from Greenfield High School in 1951. She was united in marriage to Murell Zene Chambers in Greenfield, Iowa. To this union two children were born: Roger and Ronda. They moved to Des Moines in 1961 and lived there for over 50 years.

Dee was a secretary for the Des Moines Public Schools for many years, retiring in June of 1997. She enjoyed playing cards, spoiling grandkids, jigsaw puzzles, jumble puzzles, feeding wildlife (especially enjoyed feeding Charlie her chipmunk), watching television and she loved to travel.

She was preceded in death by her parents and husband, Murell Chambers in 1995.

To order memorial trees or send flowers to the family in memory of Delores Chambers , please visit our flower store.