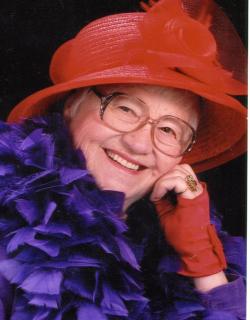 Celebration of Life Services: Will be held on Saturday, April 28, 2018, at 10:30 a.m. at the United Methodist Church in Greenfield with burial in the Fontanelle Cemetery. A luncheon will be held following the committal services at the church. Pastor Eric Schubert will officiate the service.

Memorials: May be made to the Adair County Historical Society in Greenfield.

Deloris Raper Carns-Robertson, was born August 13 1931, one mile west and one mile north of Canby in Adair county Iowa, to parents Noel and Marie Ruby Raper. She grew up in Greenfield, Iowa and was baptized in the Greenfield Methodist Church, in which she was a member.

In 1969 they moved to Anita, Iowa. she served as justice of the peace. And they were foster parents of 18 children and worked with probation officers for both Cass and Harrison Counties.

She worked full time at the Anita High school as a study hall supervisor and flag corps director for 13 years. Then she worked at the Atlantic High school for 2 years in charge of in school suspension. A job she really loved.

They then retired and started spending winters in Texas and Arizona. They also spent 9 years working summers at adventure land park in Des Moines living in their camper.

For the first 20 years of her marriage to Harold she was a hard working farm wife. Doing field work, chores, helping deliver baby calves.

She also loved to bake and design wedding cakes, waterfalls and stairways were her specialty. She also loved making scrapbooks of old barns, out houses, covered bridges, and old falling down houses. She even made scrapbooks about veterans for the historical museum.

In her later years she spent a lot of time volunteering at the meal site, Adair county tourism, Adair historical museum, area 14 agency for aging, Older Iowans legislator (Where she was honored to escort and introduce the governor). She was also a certified lobbyist for the seniors of Iowa. For which she received the Governor’s award for volunteering.

She loved playing cards, as well as cooking, baking, quilting, and dancing. She was also a very proud member of the Red Hats, she owned many hats several of which she made herself.

On Oct. 18 2004 she married Edgar Robertson and moved to Diagonal Iowa. In 2011 they moved to Fontanelle Iowa.

Being next to the oldest of nine siblings she shouldered a lot of responsibility in life and loved to keep in touch with every one of them.

To order memorial trees or send flowers to the family in memory of Deloris CarnsRobertson , please visit our flower store.
Send a Sympathy Card