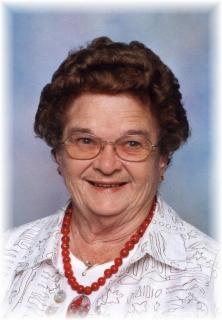 Funeral Services: Will be held on Monday, September 8, 2014, at 10:30 a.m. at the United Methodist Church in Greenfield with burial in the Greenfield Cemetery. A luncheon will follow the burial at the church. Pastor Erick Schubert will officiate the service.

Memorials: To the Deloris Davis memorial fund to be established by the family at a later date.

Deloris Pearl (Kern) Davis was born on October 8, 1926 to Bill and Sadie (Stahlnecker) Kern in rural Shelby, Iowa. She passed away on Wednesday, September 3, 2014, at the Greenfield Manor in Greenfield, Iowa, at the age of 87.

Deloris attended seven rural schools before graduating from Shelby Schools in 1945. She studied at Iowa State Teachers College in Cedar Falls, Iowa. She taught early elementary for two years south of Walnut and one year at Macendonia. Deloris loved showing the children how to tie a figure eight knot so Little Daisy, her horse, would stay put during the day. Later she moved to Omaha to work at the University Dispensary where she was the cashier and file clerk.

Deloris met the love of her life A. Dean Davis on August 5, 1949, when she attended the Old Settlers Picnic in Hancock, Iowa. Dean and Deloris were married on August 18, 1950, in Omaha, Nebraska. To this union three children were born: William (Bill), Mary Jane and Scott. Dean and Deloris lived in Omaha for two additional years. They both decided they didn’t care for city life. March of 1952, they started farming northwest of Greenfield. Deloris worked in several businesses in Greenfield until the birth of their first child. In 1974, they purchased their own homestead northeast of Greenfield.

Deloris never met a stranger. She truly enjoyed the art of conversation. She also kept a special place in her heart for dogs and cats.

She was preceded in death by her parents and husband, Dean Davis in 1991.

To order memorial trees or send flowers to the family in memory of Deloris Davis , please visit our flower store.