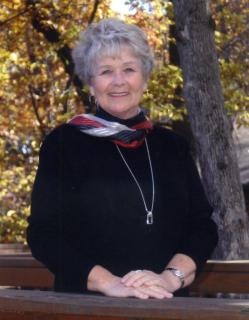 Celebration of Life Services: Tuesday, November 8, 2011, at 11:00 a.m. at the Greenfield United Methodist Church with burial in the Massena Center Cemetery at a later date.

Visitation: On Monday at the Steen Funeral Home in Greenfield from 12 p.m. to 8 p.m. with the family greeting friends from 6 to 8 p.m.

Memorials: To the DeLoy Cannon memorial fund to be established by the family.

DeLoy (Anderson) Cannon was born on May 11, 1942 on a farm in Adair County. The third child of Adolph Gustav and Lillie (Sorensen) Anderson. DeLoy passed away November 4, 2011 in Guthrie Center, Iowa.

DeLoy grew up in Massena, Iowa and was part of the class of 1960. She married Denny Leander and to this union two children were born: Ricky and Laura.

DeLoy lived in Greenfield until 1980 when she married Rollie Cannon. Together they moved to Alaska, the Bahamas, and upon Rollie's retirement, moved to Sun Valley near Mount Ayr to start up the Sun Valley golf course. In the late 1980's they moved back to Greenfield, where DeLoy worked at Cardinal Glass until her retirement in 2007.

DeLoy enjoyed life to the fullest. After retirement she once said she didn't know how she'd ever had time to work because retirement kept her so busy. She loved spending time with family and friends, playing cards with the girls, and playing golf. However, far and away her favorite pastime was spending time with her grandchildren. She absolutely cherished her grandchildren, whether they were playing cards, golfing, shopping, going out to eat, or just visiting. She attended almost every athletic event the grandchildren participated in and was very proud of them. She was fortunate enough to see her son and grandchildren participate in state-level athletic events 13 different times.

To order memorial trees or send flowers to the family in memory of DeLoy Cannon , please visit our flower store.
Send a Sympathy Card