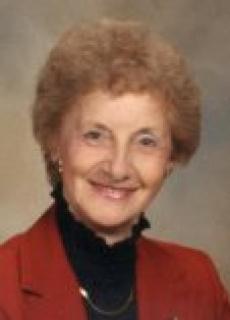 Celebration of Life Service: Will be held on Tuesday, March 8, 2016, at 10:30 a.m. at the United Methodist Church in Greenfield with burial in the Greenfield Cemetery. Pastor Eric Schubert will officiate the service. A luncheon will be held at the church following the committal services at the cemetery. The Steen Funeral Home in Greenfield is in charge of the professional arrangements.

Family Visitation: The family will greet friends on Monday at the Steen Funeral Home in Greenfield from 2:00 p.m. to 4:00 p.m.

Memorials: To the Del Brown memorial fund to be established by the family at a later date.

Delpha Irene “Del” Brown was born December 12, 1921, to Guy Leon and Florence Elnora (Joy) Gill in Collins, Iowa. She passed away on Tuesday, March 2, 2016, at the Greenfield Rehabilitation and Health Care Center in Greenfield, Iowa, at the age of 94.

In 1922, Del’s family moved from Collins to Winterset, IA where her father owned and operated a meat market until his death in 1934. She attended school in Winterset and attended Winterset High School. On December 24, 1937, Del was united in marriage to Raymond Robert Anderson in Winterset. This union was blessed with two sons: Lowell and Keith. Raymond passed away on December 15, 1941 at the age of 25.

In 1943, Del married Melvin Bodwell and they had two children: Pamela and Michael. From 1944 to 1951 the family lived in Atlantic before moving to Des Moines. Del furthered her education by taking insurance courses and a sign language course at Hoover High School. She worked at Employers Mutual Insurance Company in Des Moines. In 1969, Melvin passed away at the age of 47. Del continued to work at Employers Mutual where she did clerical work for the Audit and Engineering Department later being promoted to supervisor. For the last 9 years of employment, Del worked as a personnel assistant retiring in December of 1980.

On May 26, 1988, Del married Glenn Brown at Unity Church in Des Moines. They have made their home in Greenfield since 1988. During retirement, she enjoyed traveling to almost every state in the U.S. and to the Bahamas and Costa Rica, dining out, doing needle work, playing pinochle with friends, reading, exercising, and dancing. Del was a member of the United Methodist Church in Greenfield and was active in the Mary Circle, a member of the Legion Auxiliary, and the Ladies Pinochle Club.

She was preceded in death by her parents, Guy and Florence Gill; and twin sisters: Doris Vaskowitz and husband, Clair and Dorothy Butt and husband, Melvin and husband, Glenn (Brownie) Brown.

To order memorial trees or send flowers to the family in memory of Del Brown , please visit our flower store.
Send a Sympathy Card