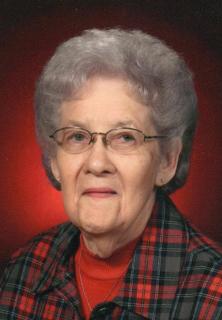 Funeral Services: Will be held on Wednesday, March 13, 2019, at 11:00 a.m. at the Massena United Methodist Church in Massena with burial in the Victoria Township Cemetery, south of Massena. Pastors Karen Patrick and James Hansen will officiate the service. A luncheon will be held at the church following the committal services at the cemetery.

Family Visitation: The family will greet friends on Wednesday, March 13th, from 10:00 a.m. to 11:00 a.m. at the Massena United Methodist Church.

Memorials: May be made to the Dolores Holste memorial fund to be established by the family at a later date.

Dolores Irene Bergren Holste was born June 11, 1928, the daughter of Forest and Lela (Reed) Polson in Prescott, Iowa. She passed away on Friday, March 8, 2019, at the Taylor Hospice House in Des Moines, Iowa, at the age of 90.

Dolores was raised in Prescott and graduated from Prescott High School in 1945. On December 28, 1952, she was united in marriage to Merlin Bergren in Prescott, Iowa. They farmed near Red Oak, Iowa and then moved to rural Massena and then in 1970 moved into Massena. Dolores worked at Farmers Savings Bank in Massena as a teller for 27 years, retiring in 1993. She had also worked as a waitress at the Elks Lodge in Red Oak, Dewey Store and was a farmer’s wife and homemaker. Merlin passed away in 1972 and in 1978 she was united in marriage to Bill Holste.

Dolores was a member of the United Methodist Church, sang in the church choir and was a 50 plus year member of the Order of Eastern Star. She enjoyed crocheting (making lots of afghans), embroidering everything from bibs to quilt blocks.

To order memorial trees or send flowers to the family in memory of Dolores Holste , please visit our flower store.
Send a Sympathy Card