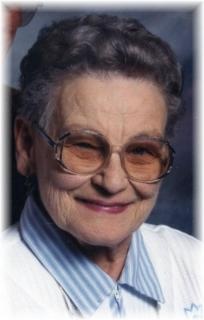 Celebration of Life Services: Friday, March 9, 2012, at 11:00 a.m. at the Steen Funeral Home in Greenfield. Pastor Jeff Banks will officiate the service.

Family Visitation: The family will greet friends on Friday one hour prior to services at the Steen Funeral Home in Greenfield.

Memorials: To the Dolores Stanley memorial fund to be established by the family at a later date.

Dolores America Stanley was born June 17, 1930, in Adair County, Iowa, the daughter of Lee Roy and Bertha Lenora (Cramer) Ruth. She passed away on Saturday, March 3, 2012, at the Iowa Methodist Medical Center in Des Moines, Iowa, at the age of 81.

She was raised on a farm in Adair County and was educated in a one room schoolhouse to begin with, having an older sister as her teacher for a while. She graduated from Greenfield High School where she was a cheerleader. She was united in marriage to Gordon Stanley in Omaha, Nebraska on July 18, 1949. To this union two daughters were born: Jacklon Lenora and Kathryn Elizabeth.

They were an "Air Force family" and traveled the world, retiring after twenty-three years. They became a "National Park Service family" and traveled all over the United States, before retiring to Greenfield. She enjoyed sewing, crocheting, needlework, loved crossword puzzles, reading "The Cat Who," books and loved birds. She was a member of the Hebron United Methodist Church.

She was preceded in death by her parents; sister, Bernadine Aupperle and brother, Leroy "Bud" Ruth.

To order memorial trees or send flowers to the family in memory of Dolores Stanley , please visit our flower store.