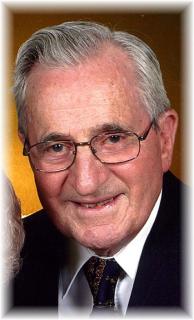 Funeral Services: Friday, February 10, 2012, at 10:30 a.m. at the Greenfield United Methodist Church with burial in the Greenfield Cemetery with full military graveside rites by the Greenfield American Legion Head-Endres Post No. 265 and V.F.W. Post No. 5357.

Masonic Services: Will be held at 6:00 p.m. at the Steen Funeral Home in Greenfield on Thursday conducted by the Greenfield Crusade Lodge No. 386 A.F. & A.M.

Family Visitation: Thursday, February 9th from 6:30 p.m. to 8:00 p.m. at the Steen Funeral Home in Greenfield.

Open Visitation: Thursday, February 9th from 2:00 p.m to 8:00 p.m. at the Steen Funeral Home in Greenfield.

Memorials: To the Don Mayes memorial fund to be established by the family.

Donald Lee Mayes was born on July 2, 1918, to R D and Crissie (Faber) Mayes on a farm in Summerset Township, Adair County, Iowa. He passed away on Monday, February 6, 2012, at the Adair County Memorial Hospital in Greenfield at the age of 93.

Don graduated from Greenfield High School in 1935 and later attended Chillicothe Business College in Chillicothe, Missouri. In 1942, he was called to serve his country in the United States Army during W.W. II. On November 11, 1945, he was united in marriage to Beatrice Evelyn Heatherington at the United Methodist Church in Greenfield. To this union were born three children: John Brian, Jane Kathleen and Craig Lee.

Don was employed a short time in Cedar Falls, Iowa and in 1947 they moved to the Henry Buchholz farm southeast of Greenfield and lived there for fifty-two years.

Don and Bea spent many years working in the 4-H program. He was a life time member of the United Methodist Church, a 50 year member of Crusade Lodge #386 A.F. & A.M., 50 year member of Order of Eastern Star, Grand Chaplain in 1993 for Iowa O.E.S., served on the Adair County Rural Water Association which was instrumental in getting the first rural water lines in this Southwestern Iowa area. Don was proud to be a good steward of the soil as he followed a four year rotation of cropping and livestock for 50 years and served on the County Committee pertaining to soil and water conservation.

He was preceded in death by his parents; two brothers, Robert and Raymond; sister, Margaret Heuckendorf; and grandson, Brian Lee Mayes.

To order memorial trees or send flowers to the family in memory of Don Mayes , please visit our flower store.
Send a Sympathy Card