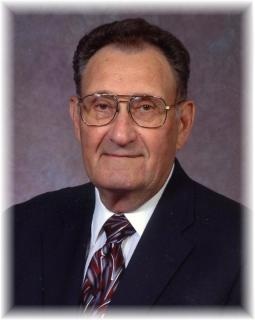 Funeral Services: Will be held on Thursday, January 24, 2013, at 1:30 p.m. at the Fontanelle United Methodist Church with burial in the Fontanelle Cemetery. Full military graveside rites will be conducted by the Fontanelle American Legion Carlson Post No. 247.

Visitation: Will be held on Wednesday, January 23rd at the Steen Funeral Home in Fontanelle from 12:00 p.m. to 8:00 p.m. with the family greeting friends from 6 to 8 p.m.

Memorials: To the Don Tiedeman memorial fund to be established by the family at a later date.

Donald Fred Tiedeman was born January 4, 1924, to Fred and Cora (Wiggins) Tiedeman at their farm house in Jackson Township, Adair County, Iowa. He died at the Good Samaritan Home in Fontanelle, Iowa on January 18, 2013, at the age of 89 years and 14 days.

Donald was baptized as a member of the First Congregational Church until it closed in May 2002, at which time he joined the Fontanelle United Methodist Church.

He attended Summerset Country School and Fontanelle Public School, graduating in 1943. He was the first Fontanelle High School graduate to letter in all sports all four years. Upon graduation he enlisted in the Army Air Corps. He was sent to Butler University in Indianapolis, Indiana for college requirements and flight training. He received his pilots wings on April 14, 1945, at the Waco Air Force Base as a Flight Officer.

Donald was united in marriage to his high school sweetheart Velma Sackett on August 26, 1944, in Corsicana, Texas, by Reverend John G. Craig, Captain of the U.S. Army Air Corps.

During their first year of marriage, they lived in San Antonio, Waco, and Midland, Texas. His last assignment was in Midland flying B-25's to train bombardiers.

On Feburary 25, 1946, he received his discharge from the Army Air Corps and returned to Fontanelle.

Upon his return from the service, he started employment for the Fontanelle Implement Company as a salesman. Later he worked for the Massena Implement Company in the same capacity. In 1957 he became employed by the Fontanelle Farmers Co-op as a tank truck driver and then as the supervisor of the TBA Department of Petroleum, retiring in 1986. He was known around town as the man who could change a tire in a white shirt and not get it dirty.

He enjoyed throughout his lifetime hunting, fishing, playing cards, trap shooting and wood working. He was known as the "Dad and Grandpa who could fix anything". One of his many loves was playing and spending time with his grandkids and great-grandkids.

His memory will be treasured and he will be greatly missed. His special grin will shine in our hearts forever.

To order memorial trees or send flowers to the family in memory of Don Tiedeman , please visit our flower store.