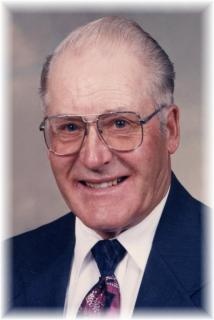 Funeral Services: Will be held on Thursday, December 12, 2013, at 10:30 a.m. at the United Methodist Church in Greenfield with burial at the Greenfield Cemetery with full military graveside rites by the Greenfield American Legion Head-Endres Post No. 265 and V.F.W. Post No. 5357. A luncheon will be held following the committal services at the church. Pastor David Rogers of the Jefferson Center Chapel will officiate the service.

Family Visitation: The family will greet friends on Wednesday evening from 6 to 8 p.m. at the Steen Funeral Home in Greenfield.

Memorials: To the American Cancer Society for research.

Donald Floyd Clayton was born January 18, 1927, to Floyd Frank and Mary Elizabeth (Hoepner) Clayton in Adair County, Iowa. He passed away on Sunday, December 8, 2013, at the Greenfield Manor in Greenfield, Iowa, at the age of 86.

Donald attended rural schools in Prussia Township. He served in W.W. II from August 1945-1947. After basic training he was sent to work at the 98th General Hospital in Munich, Germany. He met four other fellows while at the hospital who became lifetime friends. In 2009, he was given the opportunity to go on the Honor Flight and was a chance of a lifetime for him. On July 11, 1948, he married Inez Norine Kromrie south of Casey, Iowa at the birth home of Norine. To this union were born four children: Constance Lorraine and Karen Louise, Deborah Dawn and Gary Lee. They lived on several rental farms before moving back to Jefferson Township in 1963, where he raised Saler cattle and was a seed corn dealer for several companies. In 1993, he retired from farming and moved into Greenfield. He enjoyed working with Bernard Vais at the Anita Livestock, which he did for ten years.

Donald loved the outdoors. Fall was his favorite time of year. He had a love for the land, enjoyed horses, tractors and working with Saler cattle. He was a member of Farm Bureau (nearly 60 years), trustee to several cemeteries, Saler cattle association and Jefferson Center Chapel. He was a kind, loving father, grandfather and great grandfather. His family was very important to him.

He was preceded in death by his parents; two daughters, Constance and Karen; and sister, Ruth Short in 2012.

To order memorial trees or send flowers to the family in memory of Donald Clayton , please visit our flower store.
Send a Sympathy Card