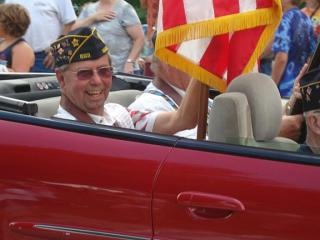 Visitation: The family will greet friends on Sunday, Nov. 20th, from 5 to 7 p.m. at the St. Patrick’s Catholic Church in Massena.

Memorials: In lieu of flowers, memorials may be made to the American Legion Post #693, St. Patrick’s Cemetery Fund or the Donald and Dolores Curry Scholarship fund at Creighton University.

Donald L. Curry was born on the family farm south of Massena, Iowa, on July 23, 1930 and passed away November 17, 2011 at the Omaha VA Medical Center. He attended Victoria #4 school and graduated from Massena High School in 1947. He graduated from Creighton University in 1951 with a bachelor of science and commerce degree, majoring in accounting. He entered the U.S. Army in January 1952 as a private and was discharged from active duty in January 1954 as a lieutenant.

After graduation from college, he started working at the Farmers Savings Bank in Massena in 1951. He became majority owner and president of the bank and Massena Insurance Agency and Tax Service in 1961. He retired from banking in 1985 and continued to manage the insurance portion until 2009. He became a real estate salesman in 1989 and a broker in 1993. He continued to run the income-tax business until his death. He recently was recognized for being a Massena businessman for 60 years.

Don was very devoted to the Massena community. He was a lifetime member of St. Patrick’s Catholic Church and has been in charge of its cemetery since 1961. He became a member of the American Legion Post #693 in 1954 and organized its annual Memorial Day program and veterans’ flags since 1962. Some of Don’s other favorite civic organizations included the Massena Chamber of Commerce, Massena Rodeo Association, Massena Development Corp., Cass County Memorial Hospital Foundation board, Massena Lions Club, Massena Centennial Corp. and its history book.

Survivors include his children: Pat of Asbury Park, N.J.; Tony of Omaha, Neb.; Chris and his partner Don Carrel of Mission, Kan.; Mary K. and her husband Bill Morrow of Pewaukee, Wis.; and Sarah and her husband Davy Summers of Marietta, Ga. Four grandchildren include Megan and Jack Morrow, and Isaac and Aaron Summers.

To order memorial trees or send flowers to the family in memory of Donald Curry , please visit our flower store.
Send a Sympathy Card