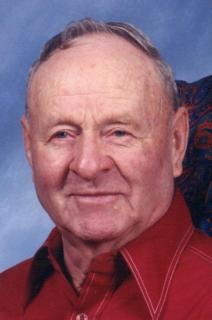 Mass of Christian Burial: Will be held on Tuesday, November 21, 2017, at 10:30 a.m. at the St. John’s Catholic Church in Greenfield with burial in the Fontanelle Cemetery. A luncheon will be held at the church following the committal services at the cemetery. Father James Ahenkora will officiate the service.

Family Visitation: The family will greet friends on Monday evening from 4:00 p.m. to 6:00 p.m. at the Steen Funeral Home in Greenfield.

Memorials: Memorials may be directed to the Don Diers memorial fund to be established by the family at a later date.

Donald Warren Diers was born December 13, 1920, the son of William and Mary (Burg) Diers in Adair County, Iowa. He passed away on Wednesday, November 15, 2017, at the Greenfield Rehabilitation and Health Care Center in Greenfield, Iowa, at the age of 96.

Don was raised in Orient and graduated from Orient High School. On February 28, 1969, he was united in marriage to Myrtle McMurphy in Hopkins, Missouri. Don farmed most of his life and also was a truck driver. He retired in 1982. Don enjoyed gardening, camping and traveling, fishing and wood craft.

He was preceded in death by his parents; wife, Myrtle; two brothers, Lowell and Gail Diers; and one sister in infancy, Wilma.

To order memorial trees or send flowers to the family in memory of Donald Diers , please visit our flower store.