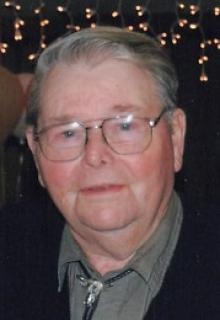 Public Graveside Services: Will be held on Monday, July 13, 2020, at 10:30 a.m. at the Eureka Center Cemetery, north of Fontanelle. Pastor Cathy Nutting will officiate the service. The Steen Funeral Home in Fontanelle is in charge of the professional arrangements. Due to COVID-19, social distancing will be practiced.

Memorials: Memorials may be directed to Don Lents memorial fund to be established by the family at a later date.

Don grew up in Adair County and attended grade school at various country schools within Eureka Township. He graduated from Adair High School in 1948 and started farming in Eureka Township. On December 29, 1949, he was united in marriage to Marie Stephenson in the Adair United Methodist Church. To this union four children were born: Ralph, Dale, Wayne and Cathy. They moved to their farm in 1959 and farmed there until moving into Greenfield in the spring of 2005.

He enjoyed raising cattle and swine for many years. During the 1960’s, he started raising purebred Hereford Cattle and Berkshire Swine. He sold a lot of breeding stock for many years. Don enjoyed having his livestock exhibited at local county fairs and the Iowa State Fair. His pride and joy during these times was having Grand Champion Hereford Bull at the Chicago International Stock Show in 1972. He liked to brag about planting corn for 70 years as he started when he was 10 years old. Later in his life, he enjoyed watching his grandchildren show livestock and attending their various sporting events. Also, Don and Marie worked at the Iowa State Fair for several years which they enjoyed sharing this experience with his sister, Irene, who also worked at the Iowa State Fair.

Marie and Don were active members of the Highland Methodist Church and enjoyed the fellowship through being part of lunching sales, serving coffee and treats at the rest area on Interstate 80, the food stand at the Adair County Fair, and the Highland Fall Supper.

He was preceded in death by his wife, Marie Lents, of 70 years; his parents, Kenneth and Doris Lents; brother, Ralph Lents, and step father, Paul Fick.

To order memorial trees or send flowers to the family in memory of Donald Lents , please visit our flower store.