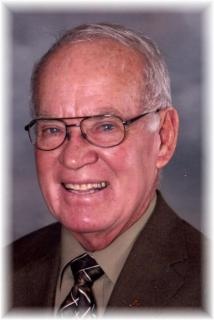 Funeral Services: Will be held on Thursday, May 30, 2013, at 10:30 a.m. at the United Methodist Church in Massena with burial in the Massena Center Cemetery, north of Massena. Pastor Dick Krambeck will officiate the service. Full military graveside services will be conducted by the Anita American Legion Post No. 210. A luncheon will follow the burial at the Cumberland Community Building.

Open Visitation: Will be held on Wednesday at the Steen Funeral Home in Massena from 12 p.m. to 8 p.m.

Family Visitation: The family will greet friends on Wednesday, May 29th, at the Steen Funeral Home in Massena from 6 to 8 p.m.

Memorials: In lieu of flowers memorials may be made to the American Cancer Society.

Donald K. McCunn, son of J. Herschel and Greta Abbott McCunn, was born May 21, 1933 in Page County, Iowa, on his mother’s birthday. He passed away peacefully at home at the age of 80 on May 27, 2013. He was raised in Page and Montgomery Counties, the seventh son of thirteen children. He graduated from Stennett High School in 1950, and worked for Montgomery County as a heavy equipment operator. He was drafted into the US Army in 1953, and served in the Korean War for two years as a heavy equipment operator. Don married Ardell Hartman on April 15, 1956 near Lyman, Iowa. He entered Iowa State University in 1957 and graduated with honors in 1961 with a degree in Agricultural Engineering. He worked for John Deere in Waterloo, then began a 35 year long career as a John Deere dealer. In 1972, he moved his family to Massena to operate McCunn Equip. Co. He retired in 1998 and worked for several years with Massena Tiling. ‘Retirement’ kept Don busy with various projects.

Don loved spending time with his family and avidly followed their activities. He enjoyed moving dirt, gardening, and traveling. He and Ardell spent many winters in their motor home in Arizona, and also took many other RV and motorcycle trips. Don loved the challenge of a handyman job.

Don was very active in civic and church activities. He was currently mayor of Massena, and had previously served as mayor and city councilman. He served as a director of Massena Telephone Company, was a charter member of Massena Lions Club, headed the National Tractor Pulls in Massena, was actively involved in the Massena Chamber of Commerce for many years, and was President of the Massena Centennial Committee in 1986. He was a member of Cumberland United Methodist Church, and had served in various church positions. In 1994, Don received a volunteer award from the Atlantic News-Telegraph.

Many people will remember Don as the kind of man who would tackle any job that needed to be done. He used his many talents to beautify the city park, update the Lions-Legion Hall and Pine Grove Church, and was first to supply equipment for any job. He took pride in knowing that he made his town a better place to live and used his entrepreneurial skills to establish several successful businesses in Massena. His grandsons loved spending time with Grandpa and learning from him that any job worth doing was worth doing well, if not perfectly! He was a willing teacher to anyone who wanted to learn and his children and grandchildren benefitted from his expertise and many talents.

Don was blessed to spend many years with a wife who gave him exceptional care, especially in the past few years during his battle with cancer. They were best friends, and liked to hike, garage sale, ride bicycles, and spend time with friends while wintering in Arizona. They recently toured Ireland, fulfilling a life-long dream. Every day, Ardell was a superb short order cook and Don enjoyed the fruits of her labor. He loved being with his family and was especially proud of the family he helped raise. Hard work was part of his daily routine and he loved the sense of accomplishment that he felt with a job well done. He could be found with a sledgehammer and gunny-sack crushing ice for homemade ice cream with the grandkids watching in awe. He loved to garden and raised many potatoes to feed his growing family over the years. A Sunday afternoon potato dig each fall became a McCunn family tradition, using a tater digger he had fashioned to pull behind a lawn and garden tractor. Grandpa will especially be missed at Easter egg hunts, birthday parties, Christmas morning muffins and gravy breakfasts, and backyard barbecues.

To order memorial trees or send flowers to the family in memory of Donald McCunn , please visit our flower store.