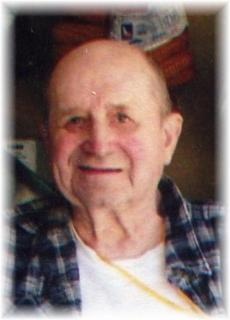 Donald Montgomery passed away on Wednesday, July 5, 2012, at the Adair County Memorial Hospital in Greenfield.

Funeral Services: Will be held on Tuesday, July 10, 2012, at 10:30 a.m. at the United Methodist Church in Greenfield with burial in the Greenfield Cemetery with full military graveside rites by the Greenfield American Legion Head-Endres Post No. 265 and V.F.W. Post No. 5357.

Memorials: To the Donald Montgomery memorial fund to be established by the family.

Donald Seldon Montgomery was born on January 15, 1929, in Adair County, Iowa, the son of Seldon and Hazel (Fox) Montgomery. He passed away on Wednesday, July 4, 2012, at the Adair County Memorial Hospital in Greenfield at the age of 83.

Don was raised and educated in Adair County, Iowa. He served his country in the United States Navy during W.W. II. Don enjoyed speaking and participating in AA, loved to bake, garden, tinkering and being with his family and friends.

Don married the love of his life, Jan, on April 27, 1996, living for a short time in Des Moines and then in their home in Greenfield. He worked for Fox Welding and Greenfield Welding for several years. After retiring he worked part time for Burger’s Plumbing and Heating.

To order memorial trees or send flowers to the family in memory of Donald Montgomery , please visit our flower store.