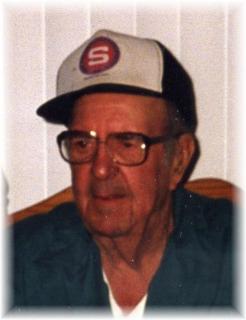 Funeral Services: Will be held on Tuesday, August 6, 2013, at 10:30 a.m. at the Steen Funeral Home in Greenfield with burial in the Greenfield Cemetery with full military graveside rites by the Greenfield American Legion Head-Endres Post No. 265 and V.F.W. Post No. 5357. The Rev. Dr. Keith Schweitzer will officiate the service.

Memorials: To the Gene Stewart memorial fund to be established by the family.

Donald "Gene" Eugene Stewart was born October 3, 1923 to Ernest and Elna Violet (Cleeland) Stewart in Fontanelle, Iowa. He passed away August 2, 2013 at the Greenfield Manor in Greenfield, Iowa at the age of 89.

Gene was raised and educated in the Fontanelle and Orient area where he also took his schooling. He joined the Army on March 20th, 1943. He received the European-African-Middle Eastern Theater Ribbon w/1 silver battle star, good conduct medal, World War II Victory Medal and four overseas service bars. He was honorably discharged on November 27th, 1945.

On September 12, 1948 he was united in marriage to Mildred Louise Wallace. To this union five children were born: Vicki, Peggy, Don, Tom and Tim. Mildred passed away on August 6, 1970. Donald married Eldeen Ruth Mangels December 30, 1973 at the Immanuel Lutheran Church in Greenfield. They made their home in Greenfield.

Gene was a mechanic and then a truck foreman for Schildberg’s Construction Company for fifty years. He enjoyed gardening, repairing all types of engines and machines. He could fix anything. He loved music, played Guitar and especially enjoyed his family and grandkids. He was a member of the Civilian Conservation Corps for six months and a member of the Greenfield American Legion for Forty years.

To order memorial trees or send flowers to the family in memory of Donald Stewart , please visit our flower store.
Send a Sympathy Card