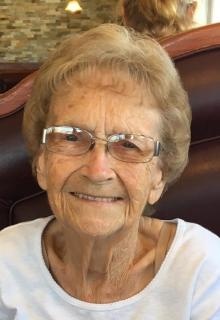 Mass of Christian Burial: Will be held on Friday, June 11, 2021, at 10:00 a.m. at the St. John’s Catholic Church in Greenfield with burial in the Orient Cemetery. A luncheon will be held at the church following the committal services at the cemetery. Father Ken Gross will officiate the service.

Memorials: Memorials may be directed to Donna Diers Memorial Fund to be established by the family at a later date.

Donna Jean (Littrell) Diers was born July 17, 1931 in Fairbury, Nebraska. She was raised by her mother, Bernice (Nash) Kingery, and her stepfather, Walter Kingery. She passed away on Saturday, June 5, 2021 at the age of 89 years of a well lived life at Mercy Medical Center in Des Moines, Iowa. She left her loving family to join her husband, Gail, on his heavenly birthday.

Donna moved to Iowa with her mother as a young child and lived in rural Orient her entire life. She graduated from Orient Consolidated Schools in 1949. On December 6, 1949, she was united in marriage to Gail Diers in the St. John’s Catholic Parsonage in Greenfield. Gail and Donna had been married for 63 years when Gail passed away in 2013. To this union four children were born: Larry, Patricia, Janet, and Jolene. Gail, Donna and their family moved to their current farm in 1966. Gail and Donna loved their farm dearly and embraced the farm life.

Donna was a hard-working farm wife and homemaker. She raised chickens and sold their eggs, tended to large gardens and canned the produce each year, cleaned homes for others, worked at the Orient Sale Barn, and Joni’s Café in Orient as a cook and waitress. Donna eventually opened her own restaurant in Orient in 1974 named Donna’s Café which she operated successfully for 16 years. Donna was an excellent cook and her café was well known for homecooked meals including hot beefs, cinnamon rolls, and a variety of homemade pies served every Saturday. The café was a popular gathering place in Orient for people to drink coffee and socialize at the big round table. After selling the café and taking some time off, Donna realized how much she missed her social interaction with people and went back to work. She was employed as a checker at Easter’s Family Center and then at HyVee in Creston until her retirement. Donna continued to do her grocery shopping at HyVee to visit the many friends she made at the store.

Donna had many hobbies that she enjoyed when she had some free time. She was skilled at sewing, quilting, crocheting, cross-stitching, keeping her yard and flower beds maintained, and playing with her cats and kittens. Gail and Donna spent many evenings at gyms and ballfields watching their children and grandchildren participate in sports activities for O-M Schools. Donna was very proud of and loved her children, grandchildren, and great-grandchildren. Large family gatherings were prominent events for which she would cook, and her home would be filled with the people she loved. Donna was a member of the St. Mark’s Catholic Church and later St. John’s Catholic church. She was a member of the Altar and Rosary Society for many years.

She was preceded in death by her husband, Gail, her parents, Walter and Bernice Kingery, brothers, Delbert and Winston Kingery, and her sister, Lois Kingery.

To order memorial trees or send flowers to the family in memory of Donna Diers , please visit our flower store.