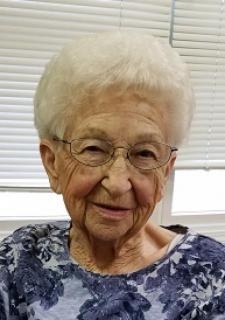 Public Graveside Services: Will be held on Friday, November 13, 2020, at 2:30 p.m. at the Fontanelle Cemetery. Pastor Cathy Nutting will officiate the service.

Memorials: Memorials may be directed to Donna Petersen memorial fund to be established by the family at a later date.

Donna Elaine Baudler-Petersen, daughter of Wilhelm Ludwig and Lottie Leanna (Bakerink) Baudler, was born July 6, 1925, at home 2 miles North of Fontanelle, IA. She passed away on November 9, 2020, at the Good Samaritan Society, Fontanelle, IA at the age of 95.

Donna attended Kindergarten through 8th grade at Summerset #3 country school. Grades 9-12 Donna attended Fontanelle High School graduating in 1943. She shared her joy for music by playing the trombone, baritone, and piano. Donna was very proud of her awards in band and typing. She loved her animals which included her mule Jack and dog Suki.

After high school graduation, Donna moved to Omaha to work for Western Union Telegraph Co and to continue schooling. She returned to Fontanelle and worked at Stoll Drug Store and Stinman Accounting. On November 11th, 1949, she was united in marriage to Milo Petersen. In 2017, they celebrated their 68th wedding anniversary.

In 1956, Donna and Milo purchased 240 acres one-mile southeast of Fontanelle where they resided for 52 years. While farming and raising 3 children John, Gloria, and Diane, Donna took an active role in the farming operation, raised chickens and sheep, milked cows, and tended a large garden. She enjoyed her strawberry patch but disliked the snakes that came with it. She was active in the Fontanelle Lions Club serving as Secretary and Treasurer, a member of the UMW, and conducted the neighborhood combine drive. In the early 70’s Donna worked part time at Carlson’s Super Value grocery store.

Fall of 2008 Donna and Milo retired, sold their acreage to their granddaughter Andrea (Reis) and husband Bret Skellenger, and moved to Summerset Estates in Fontanelle. In 2011 they moved to assisted living in Greenfield IA. Failing health in 2013 required them to become residents at Good Samaritan Society, Fontanelle, IA.

Donna enjoyed dancing with Milo, traveling with Milo fulfilling their Lions obligations, and spending winters in Arizona. Donna will be remembered for tap dancing in stores to music only she could hear, and her purple lipstick. Donna cherished her grandchildren and great grandchildren.

To order memorial trees or send flowers to the family in memory of Donna Petersen , please visit our flower store.
Send a Sympathy Card