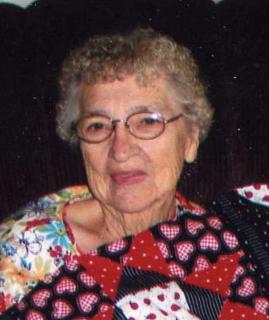 Funeral Services: Thursday, April 14, 2011, at 10:30 a.m. at the Immanuel Lutheran Church in Greenfield. Rev. Dr. Keith Schweitzer will officiate the service.  A luncheon will immediately follow the funeral service.

Memorials: To the Doris Barnes memorial fund to be established by the family.

Doris Rose Barnes was born on August 27th, 1931, on the family farm north of Prescott, Iowa to Clarence August David and Bertha Eldora ‘Sickels’ David. She passed away on Sunday, April 10, 2011, at her home in Greenfield, Iowa, at the age of 79.

Doris attended rural school in Prescott, Iowa and graduated from Richland High School in 1949. On April 8th, 1950, she was united in marriage to Dale Leroy Barnes. To this union six children were born, Rose, Gloria, Dale Jr., Beverly, Donald and Angela.

She was a member of Immanuel Lutheran Church, Greenfield, Iowa. Doris was a cook at the Greenfield High Schools for over 30 years. Doris enjoyed crocheting afghans, embroidering, gardening flowers, quilting, baking and helping at church dinners (remember those raisin bars). She loved spending time with and cooking for her family.

She was preceded in death by her parents, granddaughter Carol Ann, and her brother Francis.

To order memorial trees or send flowers to the family in memory of Doris Barnes , please visit our flower store.
Send a Sympathy Card