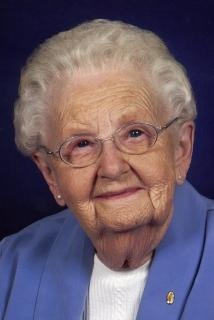 Funeral Services: Will be held on Wednesday, May 18, 2016, at 11:00 a.m. at the Greenfield United Methodist Church with burial in the Greenfield Cemetery. Pastor Eric Schubert will officiate the service. A luncheon will be held at the church following the committal services at the cemetery.

Memorials: Memorials may be made to the Doris Corey memorial fund to be established by the family.

Doris Eileen (Bolger) Corey was the youngest child born to Arthur Raymon Bolger and Ada Udosia (Lundy) Bolger on January 4, 1920 in Grove Township, Adair County, Iowa. Her sister, Thelma, was seven years older and there was an infant brother that died in August of 1917. Her family moved to a farm north of Afton, Iowa during her first year. Her father was a farmer and, although she grew up during the Depression era, she never knew times were hard. She had a good childhood in a loving family. They were self- sufficient and there was always plenty to eat. Doris attended country school in Dodge Township, Union County. She was 13 years old when she graduated from the 8th grade and the ceremony was held in Creston. Her parents moved back to Greenfield when she started high school and she graduated with the GHS Class of 1937. After graduation, she worked for a realtor, George Musmaker, for $5/week. George encouraged her to apply as a federal clerk for the Soil Conservation Service and she began work May 1, 1945; later becoming the District Clerk for the Adair County Soil Conservation as a state employee. She retired February 1982.

She married Owen Otis Corey December 19, 1946 in Topeka, Kansas. He was employed by the Fontanelle Implement Company, owned by his step-father, Fred Heuckendorf. Three children were born into this union: Douglas Owen, Linda Marie, and Janelle Ann.

Doris was a hard worker and devoted to her family. She was caregiver when her mother’s health declined and Grandma moved into their home in 1952. Doris worked full-time and would come home to bake and prepare delicious meals for her family. She canned produce from her husband’s large garden and she was an excellent cook. Her fresh raspberry pies and rhubarb crisps were a favorite and she decorated many birthday, graduation and anniversary cakes for her family. Doris was also an excellent seamstress and she especially loved to knit, crochet, and embroider. Both of her daughters received beautiful quilts for their 25th wedding anniversaries and she has prepared a set of embroidered tea towels for each of her great-grandchildren when they marry. She knitted over 63 personalized Christmas stockings, numerous sweaters and afghans. Doris was Brownie and Girl Scout leader for her daughter’s troop. She didn’t learn to drive until she was forty.

She belonged to a coupon club and saved enough for a trip to Hawaii. She and her husband especially enjoyed driving to Des Moines to visit her sister, Thelma. Otis died of a massive heart attack the afternoon of her 50th class reunion on June 27, 1987. Thelma, her sister, died August 1993.

She adored her grandchildren and was Aunt Doris to several nieces and nephews. Many of her grandchildren’s friends called her Grandma Doris. With the birth of her first great-grandchild she was affectionately known as Granny Great. Granddaughter Teresa put together a cookbook of Granny Great’s favorite recipes and family photos for her 90th birthday; her great nephew Steven illustrated the cover for it. She loved collecting and dressing dolls and she enjoyed the crossword puzzles from the Creston News Advertiser. She especially enjoyed Thursday afternoons when her great-grandson Wyatt would stop down to visit her after school.

She was a faithful member of the Greenfield United Methodist Church; active in Wesley Circle and helped with many funeral dinners and making hundreds of school bags for the Bishop’s Ingathering. She was busy with her handiwork up until she entered the nursing home, having to give it up because of arthritis. She was an original member of a Friday Sewing Club and a member of a Tuesday morning Breakfast Club. She enjoyed these friendships very much.

Doris’ goal in later life was to live long enough to attend all of her grandchildren’s weddings. Her youngest granddaughter, Lisa, was married in July of 2014. In August, Doris was admitted to Mercy Hospital in Des Moines and shortly afterwards, she entered the Good Samaritan Center in Fontanelle where she was lovingly cared for by the staff.

To order memorial trees or send flowers to the family in memory of Doris Corey , please visit our flower store.