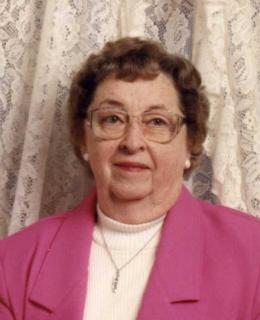 Doris Funke passed away on Monday, March 28, 2011, at the New Homestead in Guthrie Center.

Funeral Services:  Private family services will be held with burial in the Greenfield Cemetery.

Memorials:  May be directed to the Doris Funke Memorial Fund to be established by the family, in care of Steen Funeral Homes, P.O. Box 390, Greenfield, Iowa 50849.

Doris graduated from Creston High School on May 27, 1941. After high school she played the saxophone in the Harry Saxton Band in Creston. On September 1, 1945, she was united in marriage at Creston, Iowa to Dale Funke of rural Fontanelle To this union two children were born: Jane and Robert. They farmed in Adair County all of their married lives. Doris entered the New Homestead in Guthrie Center in 2007. She loved music, cooking, sewing, dogs, mandarin oranges and the warmth of the sunshine.

She was preceded in death by her parents; husband, Dale in 1981; brother and sister-in-law, Dale and Betty Gilman; brother-in-law, Don Funke; sister-in-law and husband, Pearl and Harold Patterson.

She is survived by her daughter, Jane Funke of Hinsdale, Illinois; son, Robert Funke and wife Barbara Jean of rural Fontanelle; niece, Becky Metzger and husband Brian; nephews, Pat Gilman and Mike Gilman and wife Laura; other relatives and friends.

To order memorial trees or send flowers to the family in memory of Doris Funke , please visit our flower store.
Send a Sympathy Card