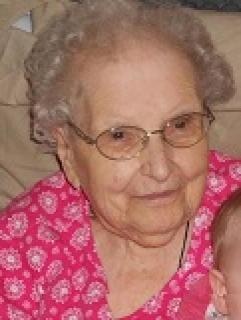 Funeral Services: Will be held on Wednesday, January 10, 2018, at 1:30 p.m. at the Steen Funeral Home in Greenfield with burial in the Greenfield Cemetery. A luncheon will be held at the Greenfield United Methodist Church following the committal services at the cemetery. Pastor Scott Hill will officiate the service.

Family Visitation: The family will greet friends on Tuesday evening, from 6:00 p.m. to 8:00 p.m. at the Steen Funeral Home in Greenfield.

Doris Lorraine Westphal was born February 5, 1923 to Oscar J. and Edna F. Westphal in Adair County Iowa. She passed away January 7, 2018 at Adair County Health System in Greenfield, Iowa at the age of 94 (almost 95 years).

She attended Maple Grove Country School, then Greenfield High School graduating with the class of 1941. After high school, she took the summer session for “normal training” at Simpson College and taught country school for almost 3 years.

Doris married Merritt Lewis on July 7, 1943 at the Methodist parsonage in Greenfield. Their first home was a two-room house at Howe. In the spring of 1947 they moved to the Herrick Farm (2 miles north of Howe) where they made their home for 35 years until moving to Greenfield in December 1982. Two children completed the family, Ardith Lorraine in 1949 and Arnold Merritt in 1951.

She was a homemaker, loving farmer's wife and mother. On the farm she had a big garden, tended her chickens and sewed. She always kept busy and enjoyed her friends and neighbors. Merritt died on March 17, 1993.

Doris enjoyed watching hummingbirds, crocheting, doing jigsaw puzzles, making unique hand-made cards and playing Scrabble. She was an active member of Fairview Church where she taught Sunday School, arranged summer Bible school for many years and was a member of the Fairview Working Band.

To order memorial trees or send flowers to the family in memory of Doris Lewis , please visit our flower store.