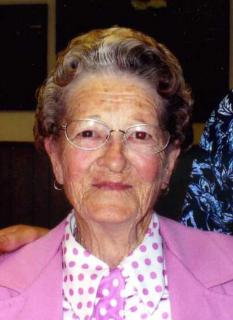 Funeral Services: Monday, June 6, 2011 at 1:30 p.m. at the United Methodist Church in Fontanelle with burial in the Fontanelle Cemetery. Online condolences may be left to the family at www.steenfunerals.com.

Eastern Star Service:  At the church on Monday by Greenfield O.E.S. Chapter 91.

Family Visitation: Sunday, June 5th, from 5 to 7 p.m. at the Steen Funeral Home in Fontanelle.

Memorials: To the Dorothea Van Vleet memorial fund to be established by the family.

Dorothea Emily Van Vleet was born May 13, 1915, in Adair County, Iowa, the daughter of Herman and Wilhelmina (Albesser) Bohling. She passed away on Friday, June 3, 2011, at the Greenfield Manor in Greenfield, Iowa, at the age of 96.

Dorothea grew up on a farm west of Williamson in Adair County. She attended country school until the 10th grade when the sudden death of her mother resulted in her needing to raise her five siblings ranging in age from 4 to 14. This maternal duty resulted in her life-long determination and work ethics. Along with taking care of her own family, she assisted neighbors with house work and child care. She was united in marriage to Albert (Ab) Van Vleet on December 21, 1935. Together, they worked as hired farm hands for Ab's uncle as well as janitors at the Richland school. That teamwork continued when they purchased the Fontanelle hardware store in 1948, working side by side every day until Ab's death in 1978. Her two sons-in-law helped to operate the store, but Dorothea continued to oversee the business, generally by dusting and sweeping. She eventually became sole owner and operator until she retired in 2007.

Dorothea's concern for the welfare of the community resulted in her deep commitment in many local organizations and activities. She was a member of the United Methodist Church, Eastern Star, White Shrine, and Rebekah Lodge. The Enterprise Club recognized her for 35 years of dedication in organizing the community Slab Supper which raised funds for the Fontanelle skating rink. Her love of the town's children will long be remembered each time they enjoy a lollipop.

Gardening was a necessity in her young life and then became her passion. Nothing was more rewarding to her than receiving compliments on it's beauty.

She is survived by her son, Eugene Van Vleet and wife Linda of Casper, Wyoming; daughter, Barbara Agan and husband Jim of Johnston, Iowa; 8 grandchildren, Jolene, Cindy, Rusty, Jackie, Ann, Mike, Angie, and James; 21 great-grandchildren, and 8 great-great grandchildren; sister-in-law, Mildred Bohling Peters of Woodward, Iowa; and other relatives. She and Ab created a huge circle of friends that became as close to her as any family member. The love she had for all who willingly helped with any request she made was heartfelt. In recent years, she greatly appreciated the attentiveness of her cousin Wayne Bohling and friend Donna Purdy. Dorothea received much help from her neighbors, the Evelyn Sickles Purdy family, and the community.

To order memorial trees or send flowers to the family in memory of Dorothea Van Vleet , please visit our flower store.
Send a Sympathy Card