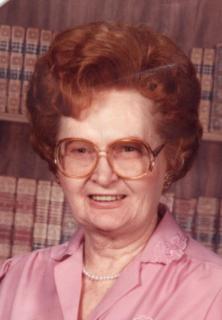 Funeral Services: Will be held on Friday, July 12, 2019, at 11:00 a.m. at the United Methodist Church in Greenfield with burial at the Greenfield Cemetery. A luncheon will be held at the church following the services at the cemetery. Rev. Jane Shepherd will officiate the service.

Memorials: May be directed to the Greenfield United Methodist Church.

Dorothy Mae Morlan Carrick was born December 14, 1921 in Scranton, Iowa. She went to her eternal heavenly home on July 7, 2019 at the Greenfield Manor, where she had been a resident there for 5 years. She was the daughter of Orrie A. Morlan and Esther Hayes Morlan. She grew up on her parent’s farm northwest of Scranton, IA. She attended the Friend’s church and as a young girl was baptized in the North Raccoon River. Later, she transferred her membership to the United Methodist Church. After graduating from Scranton High School in 1939, she took teacher’s training at Simpson College in Indianola and also took college courses at Drake University. She taught rural schools for several years and substituted at Adair-Casey schools.

On May 31, 1941, she married Donald W. Carrick in Maryville, MO. To this union, 5 children were born-Donneley Carol, Ronald Orrie, Donald Craig, Glenda Eileen and Gaynel Ranae. Dorothy lived for her family and loved sewing, cooking and caring for her home. She cooked for prisoners for 8 years while husband Donald was Adair County Sherriff and was always a helpmate in all he did.

To order memorial trees or send flowers to the family in memory of Dorothy Carrick , please visit our flower store.
Send a Sympathy Card