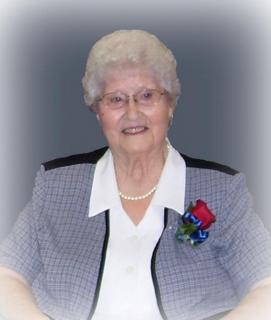 Funeral Services: Will be held on Thursday, November 7, 2013, at 1:30 p.m. at the Steen Funeral Home in Greenfield with burial at the Greenfield Cemetery. Mary O’Riley will officiate the service. A luncheon will follow the burial at the Commons Event Center in Greenfield.

Visitation: Will be held on Wednesday, November 6th from 1:00 p.m. to 8:00 p.m. with the family greeting friends from 6 to 8 p.m. at the Steen Funeral Home in Greenfield.

Memorials: To the Hebron United Methodist Church and/or the Care Initative’s Hospice.

Dorothy Marie May, the daughter of James Blaine and Erma Grace (McQuillen) Donnellan, was born on May 19, 1919, near Bridgewater in Adair County, Iowa. Dorothy entered eternal rest on November 1, 2013 at Greenfield Manor, Greenfield, Iowa at the age of ninety-four.

Dorothy lived in the Greenfield, and Adair County area all of her life. Dorothy’s family moved to Greenfield when she was young. She graduated from Greenfield High School with the Class of 1938. On March 23, 1941, she married Paul May at the Greenfield Methodist Parsonage. To this union four children were born: Jim, Pat, Janet and Dan. Dorothy was a homemaker and farm wife. She sewed bridal accessories for approximately ten years in her home. Dorothy also began working as a cook at Greenfield Manor in 1989 and retired in 1999. Dorothy and Paul celebrated their 50th Wedding Anniversary on March 23, 1991. After Paul passed away on January 2, 1992, Dorothy left the farm and moved to Greenfield.

Dorothy was a member of the Hebron Church for more than sixty years and active in the U.M.W. She also belonged to knitting club and several neighborhood card clubs. Dorothy loved to knit, crochet and made numerous items for the Adair County Fair and for her family and friends. She loved to read, garden and was a great cook. But most of all, Dorothy enjoyed spending time with family and friends.

Preceding Dorothy in death were her parents; her husband, Paul; her three brothers: Harold, Robert and Howard Donnellan; her two sisters: Cornelia Sullivan and June Richards; and her son-in-law, Taylor Donovan.

To order memorial trees or send flowers to the family in memory of Dorothy May , please visit our flower store.
Send a Sympathy Card