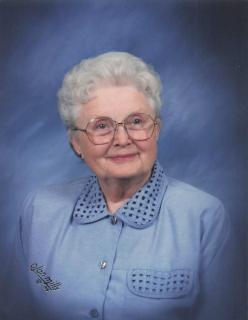 Celebration of Life Services: Everyone’s Invited—to a Celebration of Life service on July 31, 2021. Family invites people to gather at the United Methodist Church at 510 First Street in Fontanelle IA at 2:00 pm for fellowship & refreshments (including some of Dorothy’s recipes). A short program will follow at approximately 3:30 p.m. The church is handicap-accessible and air conditioned. The Steen Funeral Home in Fontanelle is in charge of the professional arrangements.

Memorials: In lieu of flowers memorials may be directed to the Good Samaritan Society, Alzheimer’s Association and to possible others.

Dorothy Marie (Frederick) Purdy was born in Adams County, IA on July 16, 1928, the second of five children to William Paul and Jessie (Retland) Frederick. She passed away on July 5, 2020, at MercyOne Hospice House in Johnston, IA.

Dorothy attended rural schools and graduated from Orient High School in 1945. She completed training in Radio-Teletype Communications at the Electronic Radio-Television Institute in Omaha, NE on October 24, 1945. World War II ended so she took a job at Adair County State Bank in Greenfield, IA.

On February 18, 1950, she was united in marriage to Durwood Dell Purdy of rural Adair County. They enjoyed nearly 70 years together as husband and wife. To this union five children were born: Roland Mark, Randall Glen, Richard Lee, Jeffrey Dell, and (finally a girl) Julie Ann. For one year they farmed with Durwood’s brother, Ronald and his wife, Helen. In 1951 they made their home north of Fontanelle in Prussia Township where they farmed and raised their family for many years. In 1971 they purchased their own crop/livestock farm, still in Prussia Township. They lived there until moving to Fontanelle in 2008.

Dorothy was a devoted housewife, supported Durwood in all things, and worked hard with him in raising their five children. She loved her family, from her kids to grandkids to great grandkids. She and Durwood attended as many school and sports events as possible. She had a loving heart, a warm smile and wonderful personality. Visitors were always welcome in her home and in her kitchen whether for a meal or just a cup of coffee. She was a wonderful cook and was well known in Adair County for her pies. One of the family’s main enterprises was pork production and Dorothy was a top competitor as she entered many a pie baking contest at the Pork Producer’s Banquets. She brought home many first place ribbons and her pies brought top dollar at the auctions that followed the pie judging contests. She was often asked to furnish pies for the local church bazaars. Other popular favorites of her grandkids and great grandkids were peanut bars, homemade glazed doughnuts, and Dutch letters.

She was a member of the United Methodist Church in Fontanelle and served as treasurer there for many years. After their children were grown, Dorothy worked as a cook at the Adair County Memorial Hospital in Greenfield. She was a member of TOPS for many years and achieved the KOPS distinction. She enjoyed walking with her neighbor, Leone Weinheimer, nearly every day while living in the country. They walked many miles together.

She served with Joy Grantham on Durwood’s Adair County Veterans Memorial committee and helped record all the names of Adair County veterans whose names are engraved on the stones in the county courtyard in Greenfield.

Dorothy’s family wishes to express their gratitude for all acts of kindness shown to them throughout their time of sorrow. In lieu of flowers we invite people to write down a favorite memory of Dorothy in a card or on Steen Funeral Home’s website. (www.steenfunerals.com). Cards can be mailed to Jeff Purdy, 1805 Robin Ct., Polk City, IA. A special thanks to the staff at the Good Samaritan Society in Fontanelle and to MercyOne Hospice House in Johnston, IA, for their excellent care. Also thanks to Steen Funeral Home for their professional services.

To order memorial trees or send flowers to the family in memory of Dorothy Purdy , please visit our flower store.
Send a Sympathy Card