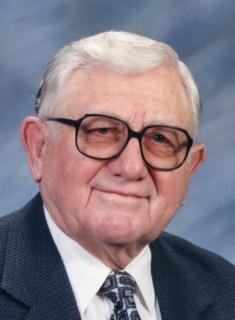 Funeral and Masonic Services: Will be held on Saturday, February 15, 2020, at 10:30 a.m. at the United Methodist Church in Greenfield with burial at the Fontanelle Cemetery with full military graveside rites conducted by the Fontanelle American Legion Carlson Post No. 247. A luncheon will be held at the church following the services at the cemetery. Pastor Eric Schubert will officiate the service.

Family Visitation: The family will greet friends on Friday evening, February 14, 2020, from 5:00 p.m. to 7:00 p.m. at the United Methodist Church in Greenfield.

Memorials: To the Durwood Purdy memorial fund to be established by the family at a later date.

Durwood Dell Purdy was born in Adair County on August 5, 1925, the third of nine children to Sherman Floyd and Muriel Augusta (Pierce) Purdy. He passed away on Saturday, February 8, 2020, at the Good Samaritan Society in Fontanelle, Iowa.

He attended rural schools and graduated from Fontanelle High School in 1943. He then worked for local farmers until 1945 when he enlisted in the United States Navy. He was honorably discharged in 1946 and farmed with his older brother, Ronald.

On February 18, 1950, he was united in marriage to Dorothy Marie Frederick of Orient. (They were only 10 days short of celebrating their 70th wedding anniversary.) To this union five children were born: Roland Mark, Randall Glen, Richard Lee, Jeffrey Dell, and Julie Ann.

He was well-known for his keen eye in raising quality Purebred Hampshire and Duroc hogs. Many 4-H members bought their county fair pigs from him and he was always seen at the hog show ring bright and early to encourage those 4-H members. He helped to organize and initiate the Adair County Pork Producers Association. He was also named a Master Pork Producer in 1971.

He loved sports, especially baseball, football, and basketball. He was invited to try out for the Brooklyn Dodgers baseball team. He attended many of his children’s sports events and served on the Bridgewater-Fontanelle Community School Board.

He was very instrumental in seeing the Adair County Veterans Memorial stones placed on the Greenfield Courthouse lawn come to fruition in 2011. As a veteran himself, he was proud to see Adair County veterans honored for their service.

Durwood was hard working, humble, a loving husband and father, and took pride and joy in raising his family. His faith and family were his top priorities. He was preceded in death by his parents, brothers Ronald, Dallas, Tom, & Jim, sisters Jean and Linda. He is survived by his wife, Dorothy Purdy, sons Rollie (Earlene Baudler) Purdy of Greenfield, Randy (Marcia Menefee) Purdy of Boone, Rich (Rhonda Dix) Purdy of Treynor, Jeff (Annette Christensen) Purdy of Winterset, and daughter Julie (Gene) Guenther of Britt, sixteen grandchildren and eighteen great grandchildren, sisters Pat (Mike) McDermott of Greenfield and Beth Ann Davis of Altoona, sisters-in-law, brother-in-law, and many nieces and nephews.

Durwood’s family wishes to express their gratitude for all acts of kindness shown to them throughout their time of sorrow. A special thanks to the staff at the Good Samaritan Society and St. Croix Hospice of Panora. The family invites you to join them for a luncheon at the church following the services at the cemetery.

To order memorial trees or send flowers to the family in memory of Durwood Purdy , please visit our flower store.
Send a Sympathy Card