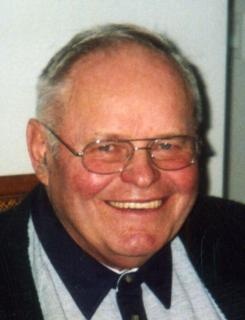 Funeral Services: Will be held on Friday, March 17, 2017, at 10:30 a.m. at the Emmanuel Lutheran Church in Fontanelle with burial in the Fontanelle Cemetery with full military graveside rites conducted by the Fontanelle American Legion Carlson Post No. 247. A luncheon will be held at the church following the committal services at the cemetery. Pastor Steven Broers will officiate the service.

Open Visitation: Will be held on Thursday at the Emmanuel Lutheran Church in Fontanelle from 4:00 p.m. to 8:00 p.m.

Family Visitation: Will be held on Thursday at the Emmanuel Lutheran Church in Fontanelle from 6:00 p.m. to 8:00 p.m.

Memorials: Memorials may be made to the Earl Baudler memorial fund to be established by the family.

Earl John Baudler was born on September 14, 1931, the son of John "Jake" Christian Ludwig and Margaret Agnes (Cunningham) Baudler at the family farm north and west of Fontanelle. He passed away on Saturday, March 11, 2017 at the Greenfield Rehabilitation and Health Care Center, in Greenfield, IA at the age of 85.

Earl was a lifelong member of the Emmanuel Lutheran Church in Fontanelle. He was baptized October 4, 1931 and confirmed in his faith on March 25, 1945. He attended country school Summerset #3 and Fontanelle High School, graduating with the Class of 1949. After graduation, he enlisted in the United States Air Force. Following basic training in Oklahoma, he served as Airman First Class in the Philippines from January 1951 until he was honorably released during an early release program in June of 1953. He continued to serve in the Air Force working in Washington D.C. until his discharge in December of 1953. He was very proud of his service to his country. After returning home he worked for his uncle Albert Baudler.

On October 24, 1954 he was united in marriage to Charlene Ruth at the Emmanuel Lutheran Church in Fontanelle. To this union six children were born: Earlene Marie, Mickey Lee, Roxanne Kay, Craig Alan, John Cl. and Timothy Earl. They farmed in the Fontanelle area, eventually starting their own dairy farm. They worked hard and raised their family with the same values of faith and hard work.

Earl sang in the church choir and at many weddings. He was also active on many community boards. He served as president on the Adair County Farm Bureau board, and various terms on the Emmanuel Lutheran Church council. He was active in the dairy industry, serving on the AMPI (Associated Milk Producers Inc.) corporate board, president of the Iowa Dairy Association Board and on the Dairy Council of Central States Inc. He also was very proud to have worked part-time for Steen Funeral Homes after he and Charlene moved to town in 1996.

Earl loved farming, dairy cattle, and especially loved running machinery such as the chopper and the big tractor. He worked as long as his health would allow. Even after he could no longer operate machinery, he drove to the farm almost daily checking the crops and "talking" to the cattle.

He was preceded in death by his parents; sister, Marjorie Wheatley; niece, Sharon (Wheatley) Turner; and grandson-in-law Courtney Johnston.

To order memorial trees or send flowers to the family in memory of Earl Baudler , please visit our flower store.
Send a Sympathy Card