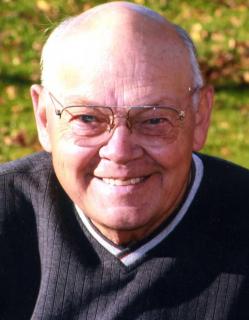 Earl Weinheimer passed away on Saturday, June 4, 2011, in Greenfield.

Funeral Services: Thursday, June 9, 2011 at 10:30 a.m. at the Emmanuel Lutheran Church in Fontanelle with burial in the Fontanelle Cemetery.

Open Visitation: Wednesday, June 8, 2011 from 2 to 8 p.m. at the Emmanuel Lutheran Church in Fontanelle.

Family Visitation: Wednesday evening from 6:00 p.m. to 8:00 p.m. at the Emmanuel Lutheran Church in Fontanelle.

Memorials: To the Earl Weinheimer memorial fund to be established by the family.

Earl grew up on the family farm south of Fontanelle. He attended country school and graduated from Fontanelle High School in 1952. On January 25, 1959, he married Betty Cass. To this union was born two girls, Vickie Lynn and Kellie Jo.

Earl lived in Fontanelle all of his life. He was baptized and confirmed at the Emmanuel Lutheran Church in Fontanelle, where he was a life time member. He enjoyed going to the Saturday evening services.

Earl worked at Fontanelle Implement, Fontanelle Coop, Case IH, and Farm Service after retirement he worked at the Iowa Aviation Center and also helped Zoomer farm. Earl enjoyed trap shooting, his yearly fishing trips to Canada, walking his dog Buster around the Greenfield Lake and his daily stops at the Coop and Rapers for coffee. He especially enjoyed spending time with his kids, grandkids and his three little great grandchildren, who were his pride and joy. He was very good at building things like the playhouse that has been passed down thru the grandchildren and now the great grandkids.

He was preceded in death by his parents. He is survived by his wife, Betty Weinheimer; two daughters, Vickie Weinheimer (Roy Barlow) and Kellie Sickles and (Ronnie); three granddaughters, Megan Edwards (Tyson), Makayla Groves (Seth) and Cassie Young; three great grandchildren, Makinley and Blake Edwards and Zoey Groves and one on the way; sister, Eleanor Knee (Orval) of Urbandale; other relatives and friends.

To order memorial trees or send flowers to the family in memory of Earl Weinheimer , please visit our flower store.
Send a Sympathy Card