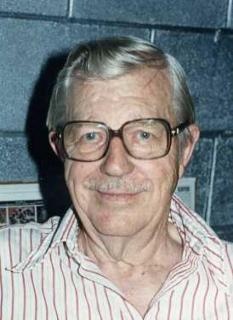 Memorials: May be directed to the Ed McIntyre memorial fund in care of the Steen Funeral Home, P.O. Box 390, Greenfield, Iowa 50849.

Edward C. McIntyre, 98 of Greenfield, IA, formerly of Toledo passed away Monday October 4, 2010 at his home. Edward was born December 23, 1911 in Van Horne, IA to Edward and Wilemina (Seeman) McIntyre. He was preceded in death by his wife Helen (Winders) and his four sister’s Edna, Mable, Clara, Berniece and two brothers Alvin and Elmer McIntyre. Edward was raised in Van Horne, Vinton and Toledo Iowa. One of his first jobs was Secretary to Justice Carl B. Stiger, a member of the Supreme Court of Iowa. He later became office manager for Joslyn MFG. Co in Tama, Iowa. After retirement he and his wife Helen lived in Greenfield Iowa. He is survived by his son Edward, Jr of Gladstone, MO and a grandson Jeff of San Diego, CA and sister-in-law Norma Winders of Greenfield, IA. Edward will be buried at Woodlawn Cemetery in Toledo on Tuesday October 26 at 2 pm. A memorial tribute will be given by Don Jacobi of Traer at the graveside in Toledo.

To order memorial trees or send flowers to the family in memory of Ed McIntyre , please visit our flower store.
Send a Sympathy Card