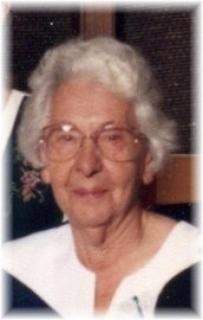 Funeral Services: Will be held on Tuesday, April 28, 2015, at 1:30 p.m. at the Steen Funeral Home in Greenfield with burial at the Greenfield Cemetery. Pastor Steven Broers will officiate the service.

Open Visitation: Will be held at the Steen Funeral Home in Greenfield on Monday from 2:00 p.m. to 8:00 p.m.

Memorials: In lieu of flowers memorials may be directed to the Little Lambs Preschool or to the Greenfield Public Library.

Edith Sarah Perry was born to Leander (Dick) and Minnie (Wahe) Kinney on the farm July 13, 1917, in Eureka Township, Adair County, Iowa. She departed her life on April 23, 2015, at Mercy Medical Center in Des Moines, Iowa, at the age of 97.

As a young girl, the family moved to a farm in Grove Township where she attended school known as “Brush College” which was a one room K-8 school. She and her sister, Arlene, walked the 1 12 miles to and from school during good weather and on bad days, roads permitting, their father drove them to school. Edith’s dream of attending high school was not fulfilled due to family finances during the depression. Edith told of helping her father in the milk barn and her mother in the garden as a child and teenager.

On April 2, 1938, she was united in marriage to Theodore (Ted) Perry at the Methodist Parsonage in Greenfield. They made their home at two homes before moving to the family farm in Harrison Township in March of 1943. Edith continued to live on the farm until a brief stay at the Greenfield Manor. She and Ted raised chickens, hogs, beef cattle and milked cows. Their marriage was a division of labor. If Ted was working in the field or away from home, Edith had the chores done when Ted returned home. On June 28, 1946, their only child, Shirley Ann was born. Edith could be seen making Shirley’s clothes on her old treadle sewing machine if she had any spare time. On September 19, 1959, Edith lost Ted to cancer.

After Ted’s passing, she continued to raise livestock and crop rented the farm land. From 1966 to 1968, Edith accompanied Shirley to school in Maryville, Missouri. An arrangement was made with neighbors to care for the beef cattle in her absence. The degree Shirley earned was made only possible by the hard work and sacrifices that Edith made.

Edith was extremely happy when Shirley and her new husband, Vernon, decided to make their home on the family farm in April of 1974. Vernon took over the care of the cattle herd and the operation of the farm.

In 1976, her granddaughter, Jennifer Lynn, was born and in 1978 grandson, James Kenneth was born. Her grandchildren were the light of her life. Edith started babysitting Jennifer at the age of 3 weeks and James at 2 weeks old while Shirley was teaching. Edith enjoyed judging their mud pies and always judged the contest a draw. Edith continued to enjoy playing with the next generation. She loved having tea parties and playing math games with the great granddaughters.

Edith enjoyed baking, quilting, bird watching and gardening. As late as last summer, she could be seen in her blue plastic chair with her cane and bucket pulling weeds. When not working in her flowers she stopped to enjoy the birds and butterflies. Edith was the family historian.

Edith was fortunate prior to her last sickness to have been hospitalized only once and to never have had surgery. She bragged that she still had her own teeth at 97.

The family knows that Edith is in heaven making hamburger buns for Vernon and is trying to keep him from putting plastic fruit in her boots and ceramic eggs and rocks in her shoes.

To order memorial trees or send flowers to the family in memory of Edith Perry , please visit our flower store.