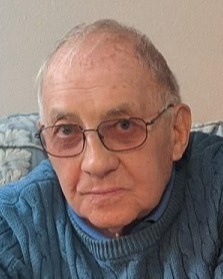 Celebration of Life Services: Will be held on Saturday, October 1, 2022, at 11:00 a.m. at the Bridgewater Activity Center in Bridgewater, Iowa.  Pastor Mary O’Riley will officiate the service.  Full Military Rites will be conducted by the William Thompson American Legion Post No. 703. A simple luncheon will be held immediately following the service.  The Lamb Funeral Home in Greenfield is in charge of the professional arrangements.  Online condolences may be left to the family at www.lambfuneralhomes.com.

Memorials:  May be directed to the Bridgewater Fire Department or to Take Back Bridgewater.

Edward Otto Schrader was born on January 10, 1936, in Prescott, Iowa, the son of Otto Henry and Golda Marie (Gipple) Schrader.  He passed away on Friday, September 16, 2022, at the Greenfield Rehabilitation and Health Care Center in Greenfield, Iowa, at the age of 86.
Edward grew up in the Bridgewater area and graduated from Bridgewater High School.  After high school he served his country in the United States Army.  After the service he moved to Houston, Texas and began his career at Nassau Bay Telephone Company, Contel and GTE as a telephone technician.  Ed enjoyed following college and professional sports.
He was preceded in death by his parents and brother-in-law, Donald Dahlof.
He is survived by his two brothers, John Schrader and wife Lola of Urbandale and Dallas Schrader and wife Elma of Jefferson; sister, Marilyn Dahlof of Harlan; several nieces, nephews, other relatives and friends.

To order memorial trees or send flowers to the family in memory of Edward Otto Schrader, 86, of Greenfield, please visit our flower store.

A simple luncheon will be held immediately following the service.