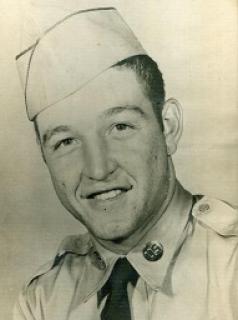 Celebration of Life Services: Will be held on Tuesday, October 18, 2016, at 10:30 a.m. at the Trinity Christian Church in Bridgewater with burial in the Garner Cemetery. Full military rites will be held at the cemetery by the Wm. Thompson American Legion Post No. 703 of Bridgewater. Pastor Tom Shinkle and Pastor David Clark will officiate the service.  The Steen Funeral Home in Fontanelle is in charge of the professional arrangements.

Family Visitation: The family will greet friends on Monday evening from 6:00 p.m. to 8:00 p.m. at the Steen Funeral Home in Fontanelle.

Memorials: Memorials may be made to the Edwin Williams memorial fund to be established by the family at a later date.

Edwin Levi Williams was born May 13, 1931, in Bridgewater, Iowa, the son of Lawrence Gilbert and Laura M. (Brown) Williams. He passed away on Friday, October 14, 2016, at the Good Samaritan Society in Fontanelle, Iowa, at the age of 85.

Edwin graduated from Bridgewater High School in 1948. He served his country in the Korean War and was in Korea for 18 months. He lived in Bridgewater from 1931 to 2014. On November 23, 1952, he was united in marriage to Mary Lou Dwyer in Greenfield, Iowa. To this union five children were born: Randall, Curtis, Douglas, Krystel and Chuck. Ed worked for Bridgewater Oil Company, Don McMorran, owned and operated the Standard Oil Station in Bridgewater, drove truck for the Standard Oil Tank Wagon and owned and operated the Midway Gas Station in Massena and was a self-employed carpenter. He retired in 2001. Ed enjoyed fishing with the boys and grandchildren and especially enjoyed spending time with his family. He was a member of the Wm Thompson American Legion Post No. 703 in Bridgewater.

The family of Edwin Williams wishes to express their gratitude for all acts of kindness shown to them in their time of sorrow and invites you to join them for a luncheon at the church following the committal services at the cemetery.

To order memorial trees or send flowers to the family in memory of Edwin Williams , please visit our flower store.
Send a Sympathy Card